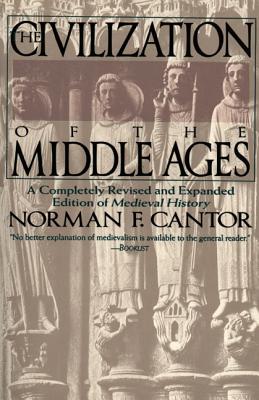 The civilization of the middle ages

Now completely revised and expanded, this comprehensive general history of the Middle Ages centers on medieval culture and religion rather than on political history, and retains the powerful narrative flow that made the earlier edition so accessible and exciting. Read More

Now completely revised and expanded, this comprehensive general history of the Middle Ages centers on medieval culture and religion rather than on political history, and retains the powerful narrative flow that made the earlier edition so accessible and exciting. Read Less

In the Wake of the Plague: The Black Death and the World it Made

The Sacred Chain: The History of the Jews

The American Century: Varieties of Culture in Modern Times

The making of the Middle Ages

The Last Knight: The Twilight of the Middle Ages and the Birth of the Modern Era

Struggle for power in Middle Ages

I found the book to be very well researched and surprisingly engaging for a scholarly book. The author, Norman Cantor, was somewhat misleading by calling the book, "Civilization of the Middle Ages." I was expecting a wider range of topics to be included in his research, whereas the primary focus seemed to the struggle for primacy between the Catholic Church and the emerging monarchies of Western Europe.

I agree with the author that this struggle played a very large role in shaping the culture that arose after the collapse of the Roman Empire. Many of the giants of political and religious thought came from the ranks of the clergy, but their writings were largely limited by the risk of harsh punishment that followed the charge of heresy.

I would have wished that the author had given greater emphasis on the effects of the Papacy's heavy handed approach on the growth of civilization and culture during the Middle Ages. Was the rebirth of learning and artist achievement held back for centuries by the Popes attempts to wield absolute religious and secular power?

I did enjoy the the author's inclusion of the role of Islamic culture in the form of art, literature, architechture, math, science and philosopohy in the formation of modern Europe. Overall, the book was well written and very informative, but should have taken a broader view of the cultural dynamics that were at play during this critical period of western history.