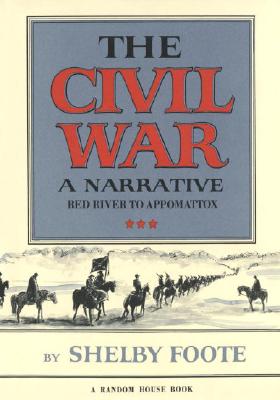 The Civil War: A Narrative

Focused on the pivotal year of 1863, the second volume of Shelby Foote s masterful narrative history brings to life the Battle of Gettysburg and Grant s Vicksburg campaign and covers some of the most dramatic and important moments in the Civil War. Includes maps throughout. "This, then, is narrative history a kind of history that goes back to an older literary tradition.... The writing is superb...one of the historical and literary achievements of our time." The Washington Post Book World " Mr. Foote has an acute ... Read More

Focused on the pivotal year of 1863, the second volume of Shelby Foote s masterful narrative history brings to life the Battle of Gettysburg and Grant s Vicksburg campaign and covers some of the most dramatic and important moments in the Civil War. Includes maps throughout. "This, then, is narrative history a kind of history that goes back to an older literary tradition.... The writing is superb...one of the historical and literary achievements of our time." The Washington Post Book World " Mr. Foote has an acute sense of the relative importance of events and a novelist's skill in directing the reader's attention to the men and the episodes that will influence the course of the whole war, without omitting items which are of momentary interest. His organization of facts could hardly be better." Atlantic "Though the events of this middle year of the Civil War have been recounted hundreds of times, they have rarely been re-created with such vigor and such picturesque detail." The New York Times Book Review "The lucidity of the battle narratives, the vigor of the prose, the strong feeling for the men from generals to privates who did the fighting, are all controlled by constant sense of how it happened and what it was all about. Foote has the novelist's feeling for character and situation, without losing the historian's scrupulous regard for recorded fact. The Civil War is likely to stand unequaled." Walter Mills" Read Less

All Editions of The Civil War: A Narrative

The Civil War: A Narrative: Volume 1: Fort Sumter to Perryville

Stars in Their Courses: The Gettysburg Campaign

Shelby Foot is an expert on the civil war. This book, Riot And Resurgence Tullahoma to Meridian was excellent.

Of the fact that Shelby Foote's 'Civil War' narratives are five-star works there can be no doubt. But what strikes me hardest about Foote's history is all the passion that it stirs. The Civil War has been over for a hundred and fifty years. The last veterans of that war died when I was a tiny child. They were the great grandparents of my generation. Few of us ever met any of them. And yet --

I was sitting at an outdoor cafe in Missouri with four faculty members from the university, all of them PhDs in one field or another. The woman across the table was fifty-something years old. She said, conversationally, that she was 'from the Georgia hill country.'

"Oh, tish!" I said with a grin. "There haven't been any hills in Georgia since Sherman went through there."

Ooooops! She rocketed ten feet straight up out of her chair and -- at the top of her rise -- started screeching death and atrocity. I thought she was going swoop down from the sky and assault me physically. Her lady friend had to drag her, kicking and snarling, off the outdoor deck of the restaurant and back to her car before the uproar subsided. My face was surely red.

I mean come on, people! I cop guilty to being foolishly insensitive, but what about her? How long does a thing have to be over before it's finally over for all of us? How many generations removed from events do we have to be before we can joke about what happened?

In a certain town in Iowa, I went to a meeting of a re-enactment club. Once a year they all dress up in uniforms and pretend to be soldiers at Shiloh. Yelling and screaming, they stage mock charges though a cornfield, firing paper wads from black-powder weapons -- I thought -- just to hear the noise and see the smoke.

Silly stuff, what? Well, don't laugh at them because they'll hurt you. I got a lecture during which I was sternly informed that Iowa sent more of her sons to the war, per family, than any other state in the Union. Because of that fact, I was told, descendants of Iowa Civil War veterans have pride of place in front of Civil War veterans' descendants from other Union states and it's no laughing matter.

Understand none of that means anything to me. I never bothered to check on the assertion and so I have no idea if it's true. And if it is or if it isn't true, I say: "So what?"

To characters like the lady from Georgia and the cranks in that re-enactment society, Shelby Foote is certainly a hero. I don't think Foote intended it to work out that way but his books raise goose bumps on them and so he is stuck with it all the same. It doesn't matter what he writes now or in the future because it is for his Civil War opus that he will be remembered. With publication of his Civil War history, Shelby Foote became America's Edward Gibbon.

I read the first of these doorstops in 2007. I read the second in 2008. I'm going to read the third one this year because -- even though I know how the war ended -- I want to say I finished the chore. It is good reading, withal. I'd recommend it to anyone who doesn't carry a gun.