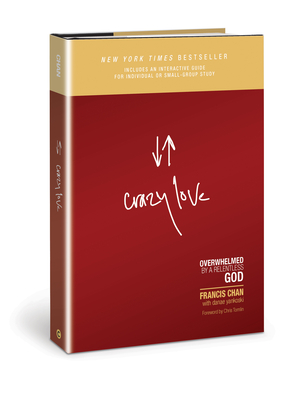 According to Francis Chan, "The crazy people in this world are those who experience God's love and remain complacent, not those who let go of all they have and follow Him completely." Chan's groundbreaking book Crazy Love has transformed the lives of millions--and is now available in a new hardcover edition. Read More

According to Francis Chan, "The crazy people in this world are those who experience God's love and remain complacent, not those who let go of all they have and follow Him completely." Chan's groundbreaking book Crazy Love has transformed the lives of millions--and is now available in a new hardcover edition. Read Less

All Editions of Crazy Love: Overwhelmed by a Relentless God

Forgotten God: Reversing Our Tragic Neglect of the Holy Spirit

You and Me Forever: Marriage in Light of Eternity

Remembering the Forgotten God: An Interactive Workbook for Individual or Small Group Study

Erasing Hell: What God Said about Eternity, and the Things We've Made Up

Captivating: Unveiling the Mystery of a Woman's Soul

Radical: Taking Back Your Faith from the American Dream

gets us all to thinking that we have SOOOOOO much..do we really NEED it all for ourselves? God meant us to share..so go forth and be an example to others..play it forward!

This is a beautiful, inspiring book. I highly recommend this to anyone, whether they are religious or not.

The book does indeed promote a works-type salvation. This line of thinking appears to come out of a teaching called "Lordship Salvation," popularized by the release of the book, "The Gospel According to Jesus," by John MacArthur in the late 1980s. Basically, it posits that the simple gospel message of Acts 16:30-31, John 3:16-18, Romans 4:5, Titus 3:5, and Ephesians 2:8-9 is not good enough for salvation. A true believer must also make God "the Lord of his life." Anyone who doesn't, is lost! But where does that leave the Corinthian church who were backslidden believers, but believers indeed, according to Paul (Paul refers to them as "sanctified in Christ Jesus and called to be holy," 1 Cor. 1:2; he also calls them "brothers" several times throughout 1 Corinthians, although worldly or carnal ones---1 Cor. 3:1-3). What about the prodigal son who was a son when he was living with his father; he remained a son throughout the lengthy time that he strayed away, and was still a son when he returned home to the father. Or how about Lot, who lived in a backslidden condition his entire adult life, yet Peter commends him as a righteous man in 2 Peter 2:7. Chapter 5 of "Crazy Love," in my opinion, was especially mean-spirited and judgmental; Chan sends a large portion of the evangelical church (perhaps even the majority), those whom he labels as "lukewarm" to hell. Chan sets up a false dichotomy between believers who are sold-out to God vs. the average churchgoer who doesn't appear to be very committed or on-fire for the Lord. Guess where the second group is going? To quote Chan, pp. 83-84, "As I see it, a lukewarm Christian is an oxymoron; there is no such thing. To put it plainly, churchgoers who are 'lukewarm' are not Christians. We will not see them in heaven."