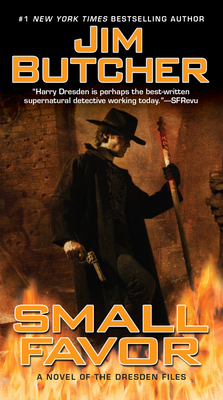 An old bargain has placed Harry in debt to Mab, monarch of the Winter Court of the Sidhe. She's calling in a small favor he can't refuse--one that will strain his skills and loyalties to their very limits. This "New York Times" bestseller is now in a tall Premium Edition. Read More

An old bargain has placed Harry in debt to Mab, monarch of the Winter Court of the Sidhe. She's calling in a small favor he can't refuse--one that will strain his skills and loyalties to their very limits. This "New York Times" bestseller is now in a tall Premium Edition. Read Less

All Editions of Small Favor

Always a hoot. Flashman with a supernatural twist.

Small Favor is the greatest Dresden book yet!

Jim Butcher creates an atmosphere of Armageddon, in my new favorite book of The Dresden Files series. Mab calls in one of her favors that Harry owes the Sidhe, Queen of Air and Darkness. Harry can not refuse Mab on this one, because of the SI crime scene investigation of a building torn by ritual magic. And not just any magic, but Very Powerful ritual magic. Together, Harry and Murphy are drawn into an investigation for the missing person/Baron/criminal, Marcone. Taxied by Thomas, and with the aid of the Knights Michael and Sanya, Harry gets in way over his head, (as usual), when he must battle the Denarians, Summer?s gruff brothers, and himself, (with two black eyes and a broken nose), all while trying to save the kidnapped Marcone and tortured Ivy. With the overwhelming fear of the Denarians? possession of the Archive, more is revealed about Ivy, her role, her childhood, and her parentage. Also, Nicodemus? conversations clues Harry in finding who is behind the Black Council. Harry will barter everything he has, including the sword Fidelacchius and their advantage in their collection of the silver coins, in order to try and stop the long term, destructive plans of Nicodemus. Harry shifts his romantic eye away from Murphy and onto Luccio, which I do not care for at all. Table conversations with Luccio will show a secret that Dresden is hiding from the White Council about Bob. With the realization that the war between the Knights and Denarians can finally come to an end soon, Michael sees that he can simply be a father and husband to his family. Or, will a life altering accident allow the possible archangel to continue to be a Knight wielding Amoracchius? Can Harry repay the favor to Uriel, whom his godmother has warned him about?

Another in a series of great reads

If you have not met the only practicing wizard in Chicago, you are missing out on a very rewarding relationship. Harry's practice has taken him to some very interesting places, like the parts of Chicago that exist below the city today, and even into the classical fairie realms. But, if you have never read one of Harry's earlier adventures, don't let that stop you from picking up this very entertaining book. This book, like all of Dresden's adventures, stands alone. If you have read all the earlier adventures, then this will be a richer read, and will carry you to new places in his ever more complex life.