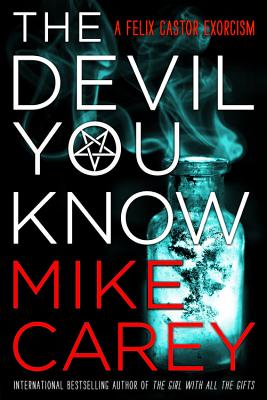 The Devil You Know

Felix Castor used to cast out demons for a living. But in a time when the supernatural realm is in upheaval, his skills are in renewed demand. The one final, well-paying assignment he accepts, however, turns into a "who can kill Castor first" competition, with demons, were-beings, and ghosts all keen to claim the big prize. Unabridged. 2 MP3 CDs. Read More

Felix Castor used to cast out demons for a living. But in a time when the supernatural realm is in upheaval, his skills are in renewed demand. The one final, well-paying assignment he accepts, however, turns into a "who can kill Castor first" competition, with demons, were-beings, and ghosts all keen to claim the big prize. Unabridged. 2 MP3 CDs. Read Less

All Editions of The Devil You Know

It's a good book with clever ideas

I read books 3 and 4 before reading this one (book 1), and I was *still* surprised by many of the details and events here. Carey has done a good job here. Felix Castor is a well-written character, and the world in which he lives and works is an entertaining one to visit.

Hard-boiled urban fantasy is one of my favorite mutations of the horror genre of the last five years or so. Jim Butcher, with his character Harry Dresden--wizard for hire and fighter of the dark forces lurking in, under, around, below, above, and parallel with Chicago is, at this point, probably the best established of the authors working in this genre. Mike Carey, a DC comics writer, is now making a stand with Felix "Fix" Castor, exorcist-cum-detective in The Devil You Know.

Fix Castor is--or was, as he's been out of the game for a year or so as the novel opens--an exorcist for hire in London. The last few years of the 20th century saw an exponential surge in psychic and paranormal activity, and London is rife with ghosts and were-creatures and all sorts of things that go bump in the night. Shades of Ghostbusters, perhaps?

In this first book of the series Fix is, as happens so often in hard-boiled fiction, drawn into a case which he has no interest in taking on. He's so reluctant, in fact, to mess with exorcisim anymore that in the first scene of the book he's working as a magician for hire at a kid's birthday party. The case in question--which comes up just in time to rescue Fix financially, at least in the short run, after his antics at the birthday party cause him to forfeit his payment-- involves a ghost which is haunting the Bonnington Archive.

The Bonnington is the resting place of rare--and sometimes just old--papers, books, and records, and of one angry and violent ghost. He takes the case on for the money, but, sucked in by the unusual character of the ghost, his aim swerves from that of your basic exorcism and becomes instead one of a detective solving a murder mystery. There are metaphysical hijinks, death and near-death, but Fix solves the crime and helps the ghost find her rest, albeit after a great deal of physical and psychic damage to himself.

The new Fix Castor book, Vicious Circle, is just out in hardcover.

I was int the mood for something different and Carey's tale of Felix Castor, freelance exorcist, filled the bill nicely.

This is not your typical possession novel as it is a combination of mystery and supernatural fantasy with a good dose of humor thrown in.

Business is booming for Felix in a time when the spirit world seems to be overflowing into the real world at a brisk pace and he is recruited to deal with a nasty spirit that resides in the Bonnington Archives. Malicious spirits and equally evil mortals abound as he must fight to find justice for a wronged ghost.

Excitins as well as fun.