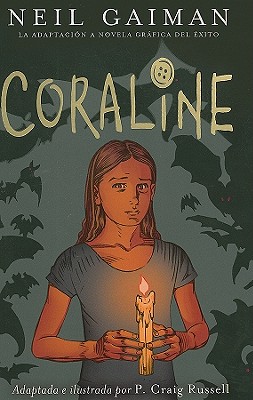 Looking for excitement, Coraline ventures through a mysterious door into a world that is similar, yet disturbingly different from her own, where she must challenge a gruesome entity in order to save herself, her parents, and the souls of three others. Read More

Looking for excitement, Coraline ventures through a mysterious door into a world that is similar, yet disturbingly different from her own, where she must challenge a gruesome entity in order to save herself, her parents, and the souls of three others. Read Less

All Editions of Coraline

A Wrinkle in Time

I think my precocious and imaginative granddaughter will love this book when she's 8. It's rich language and story are at the edge of what she can now parse and contemplate.

Better than the movie

This is a well written, enchanting story. This edition has wonderful drawings and just enough mystery to keep you turning the pages in a hurry. Highly recommended. The movie was fun, but you have to read it to appreciate Gaiman's whimsy.

Neil Gaiman's novel is a smart and witty psychological deconstruction of the modern myth of parental affect, the illusion of the perfect family and the social control of the well-behaved child. Shifting between a sense of mild desperation and the qrotesque horror that springs from organized family life, the author manages to excorcise our childhood fears by allowing us to dream once more of a parent-child relationship that derives its healing power not from the need to attempt perfection, but rather from its human flaws, which allows us to breathe once more.

I have read the book and have not taken time to view the DVD yet. The book is excellent and I hope the video will be likewise.

This is the strangest, deliciously creepy book I have read in recent memory. I could not put this book down. It is not a long story, but is definitely satisfyingly complete. The illustrations just add to the flavor.

Coraline is easily bored, especially since she and her parents moved into the new house. But Coraline likes to explore. There are fourteen doors in the new house but one is locked and won't open. There is a key; when her mother unlocked the door nothing was revealed but a brick wall. The house is made up of probably three flats on her side of the big house, and the other tenants are nice, though a little strange. Two old ladies who read tea-leaves in one flat and a strange old man who talks of his musical band of mice in another. Returning to her own flat after visiting her neighbors, Coraline dwells on the problem of the door that is locked. There must be an equal part of the house on the other side.

Alone one day, she climbs up and snags the bunch of keys hanging high on the wall, which fall to the floor. Taking the one odd key, and on opening the door discovers that the brick wall is not there but there is a long corridor. This is where the book moves from a somewhat typical young adult book to a horror story with all its mystical and exciting thrills, because down the corridor is a replica of their own side of the house, but not quite right. Strangely the rooms are furnished with the same furniture, but slightly off. And strangest of all, Coraline's mother is there, but not quite. From here the story must be read because what thrill would one get if there are spoilers in the review!

I really enjoyed this book, was fascinated by it, and will definitely be reading a lot more of Gaiman's books. I highly recommend it to anyone who likes shivers from ghost stories told around a campfire (this is not a ghost story, but the analogy works). I would not recommend it for young children, though.