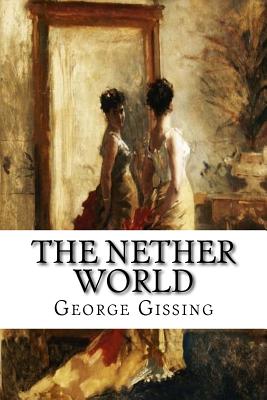 Although he was overlooked in the early years of his literary career, British novelist George Gissing eventually rose to acclaim, largely on the strength of his unflinching portrayal of the lives of England's less fortunate. Regarded as one of his most accomplished works, The Nether World follows the intertwined fates of three impoverished families, all tied together through central figure Sidney Kirkwood. Read More

Although he was overlooked in the early years of his literary career, British novelist George Gissing eventually rose to acclaim, largely on the strength of his unflinching portrayal of the lives of England's less fortunate. Regarded as one of his most accomplished works, The Nether World follows the intertwined fates of three impoverished families, all tied together through central figure Sidney Kirkwood. Read Less

All Editions of The Nether World

In his novel "The Nether World", George Gissing offers an unsentimental, grim, and uncompromising portrayal of life in the London slums in the last third of the nineteenth century. Gissing (1853 -- 1903) was a late Victorian English novelist who deserves to be better known. As a promising young student, Gissing fell in love with and stole to support a prostitute, Helen Harrison ("Nell").After a prison term and a subsequent stay in the United States, Gissing returned to England and married Nell in what proved to be a stormy and unhappy relationship for both parties. Nell died in 1888 after she and Gissing had been separated for six years. When Gissing saw the conditions of the foul room in which Nell lived, he vowed to write a book in her memory to expose the abysmal character of London slum life. The result was "The Nether World" (1889). It is Gissing's seventh novel and his fifth and final book set in the London slums. Together with "New Grub Street", "The Odd Women", and "Born in Exile" it is among Gissing's best novels. Unlike most of Gissing's books, it is generally in print and accessible.

Although Nell's death moved Gissing to write this novel, little in it is autobiographical. Gissing had lived in the slums of London he describes after his return from the United States. He was a compulsive and inveterate walker of city streets and a detailed observer of what he saw. He also did a great deal of reading, both of novels and of studies of the urban poor, that found its way into "The Nether World."

The book is lengthy and densely plotted. It is set in its entirety in a small area called Clerkenwell with few scenes of life outside the slum. On first blush, the novel can be read as a series of scenes and episodes of slum life and of characterizations of the varied residents of Clerkenwell. The elaborate plot initially appears hazy but emerges as the book proceeds. The novel includes an extended group of characters who are carefully delineated. The novel centers on a young man, Sidney Kirkwood and a younger woman, Jane Snowdon. As with other Gissing male lead characters, Kirkwood has a degree of artistic and intellectual interests that makes him restless. He has a steady job setting jewelry which places him on the higher levels of the nether world. Jane Snowdon is a young girl of 13 when the story begins and suffers from abusive treatment from the owners of a cheap rooming house, Clem Peckover and Clem's mother. Jane is rescued from the worst of the abuse by John Hewitt, an aging and struggling worker who rooms with his large family in the Peckover house.

The plot centers upon the appearance of an aged man, Jane's grandfather, Michael Snowdon, and separately upon the appearance of Jane's father, John Snowdon, a wastrel who abandoned Jane when she was young to the cruelties of the Peckovers for whom she works as a scullion. Michael Snowdon has lived in Australia and rumors, which prove to be well-founded, circulate throughout the nether world that he has become wealthy. The plot revolves around Michael's wealth and his will, as John Snowdon and the Peckovers scheme, together and against one another, to take the old man's money upon his death. Their attempts are vicious and low in the extreme. As Jane reaches the age of 16-17, she and Kirkwood fall in love. Kirkwood plans to marry her but backs off because he does not wish to be seen as scheming for Michael's money and because Michael has planned to use his money for charitable purposes only to be administered by Jane and by Sidney. Sidney marries the daughter of John Hewitt, Clara who had spurned him years earlier. Talented, ambitious, and selfish, Clara had run off from Clerkenwell in the hopes of becoming an actress. A rival had thrown acid in Clara's face permanently disfiguring her, and Clara had returned to her father in Clerkenwell because she had no other place to go. Largely out of a sense of duty, Sidney marries Clara in a relationship that proves depressingly unhappy.

Scenes of Clerkenwell, the streets, the garment factories, the fetid, crowded and unsanitary dwellings, the criminality, the hopelessness, and the venality of the residents are tightly drawn without hint of sentimentality or idealism, unlike, for example, Dickens. The descriptive scenes of the novel include a chapter called "Io Saturnalia!", which is a description of the poor masses during a bank holiday. Another chapter "The Soup Kitchen" describes the response of the Clerkenwell residents to attempted charity.

Among the many characters in the novel is a young woman named Pennyloaf Candy who marries Bob Hewitt, the rootless and ultimately criminal son of John. Pennyloadf is subjected to endless abuse which she endures unstintingly. Another figure from Clerkenwell is Mad Jack who functions as a prophetic figure. In a chapter "Mad Jack's dream" late in the book, Mad Jack exclaims:" This life you are now leading is that of the dammed; this place to which you are confined is Hell! There is no escape for you! From poor you shall become poorer; the older you grow, the lower shall you sink in want and misery; at the end there is waiting for you, one and all, a death in abandonment and despair. This is Hell -- Hell-Hell!"

Gissing's portrayal of the nether world is bleak and grim. From this novel, he sees no hope of redemption, either in the form of education, charity, or social change. His attitude towards his characters is a difficult mixture of sympathy and hopelessness. "The Nether World" is Gissing at his harshest and most pessimistic. A difficult novel, "The Nether World" succeeds in capturing the world of a woman Gissing loved, Nell Harrison.