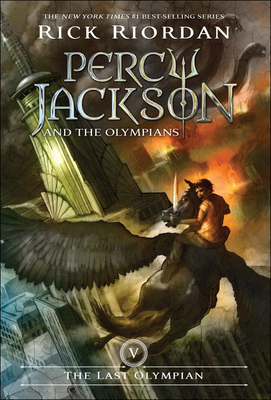 Includes a sneak peak at "The heroes of Olympus, book 1: The lost hero." Read More

Includes a sneak peak at "The heroes of Olympus, book 1: The lost hero." Read Less

All Editions of The Last Olympian

The House of Hades

The Battle of the Labyrinth

This novel, written by Rick Riordan, is the final installment of the "Percy Jackson and the Olympians" Series. This was my second favorite of the series (5 Books Total), however I could definitely make a case for it being the best.

The book already starts off with Percy and Beckendorf landing on the Princess Andromeda, where they both attempt to blow the ship up and cause Luke and Kronos to delay their attempt in conquering Mount Olympus. The gang heads to New York and teams together to prevent Western Civilization from collapsing. Will the prophecy of Percy hold true on the day of his Sixteenth Birthday? Read the book and find out!

?The world was collapsing, and the only thing that really mattered to me was that she was alive.?