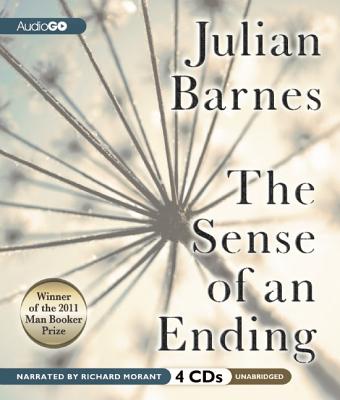 Follows a middle-aged man as he reflects on a past he thought was behind him, until he is presented with a legacy that forces him to reconsider different decisions, and to revise his place in the world. Read More

Follows a middle-aged man as he reflects on a past he thought was behind him, until he is presented with a legacy that forces him to reconsider different decisions, and to revise his place in the world. Read Less

All Editions of The Sense of an Ending

The Man in the Red Coat

The Noise of Time

"History is that certainty produced at the point where the imperfections of memory meet the inadequacies of documentation." This is one of several difficult teachings offered and expounded in Julian Barnes' short, self-referential novel, "The Sense of an Ending". The book includes many reflections upon the nature of time, history, the possibility of self-understanding and moral responsibility. Yet the book is short and draws the reader into the story. Every scene in the book needs to be read carefully to make sense of the studied ambiguity of the close.

The book is recounted in the first person by a retired, long divorced man in his 60's, Tony Webster. The story unfolds in two parts. In the first part, Tony recounts in what he admits is a selective manner the story of his life through college. The story focuses on his boyhood friendships and on their youthful intellectual pretensions. One of the circle of friends, Adrian Finn, is in fact intellectually gifted while the other three lads, including Tony, are basically ordinary. Tony comes to young manhood in the 1960s and finds a girlfriend, Veronica, who frustrates him by her unwillingness to have sex. Tony spends what might appear to be a routine weekend at the home of Veronica's family which will prove to have large implications for the story. Tony and Veronica break up while Veronica and Adrian become involved. Ultimately Tony marries a woman, Margaret with whom he has a daughter before the couple divorce. Tony has a solid if undistinguished career before his retirement.

The second and longer part of the book unravels and develops the tensions from Tony's earlier life. It develops tautly and inexorably. The book makes a great deal of the device of the unreliable narrator. Tony's possible unreliability is hinted at from the beginning and becomes increasingly apparent as the story progresses. Events require Tony to make sense of the events from his youth and early manhood selectively described in the first part of the book. Possible final understandings of the story are elliptically and cunningly stated.

Questions about the possibility and reliability of historical knowledge, among other things, get expanded into questions about self-understanding. Many early scenes and philosophical discussions are mirrored as Tony develops his story.

The book held my attention. The ambiguities of the ending can be parsed out with some reflection and consideration of the foreshadowing earlier in the book. The book produces a feeling of uneasiness and disturbance, which doubtless was what the author intended. I found the book bloated and philosophically overdone, in its post-modernism, for the story it told. I wanted to try to understand Tony's life without the large theories. Even so, the book effectively combines tension and suspense in its development with reflections upon the nature and possibility of self-knowledge.

I thought the book was in wonderful shape and I enjoyed having my book shipped as soon as possible. Thank You, for your great services.

not my cup of tea

Whilst I can appreciate the writing skills of Julian Barnes, I did not enjoy the book. For my reading taste, it is too much of a downer. However, that said, it has some comical moments in it, and it is artfully written. It was a book group choice, and in our discussion, there was still a lot of confusion as to what exactly happened and who did what, so clearly, the author did not manage to convey all the necessary details - or left us in the dark deliberately.