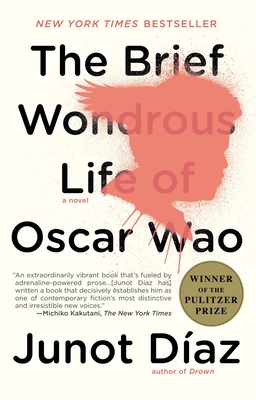 Winner of both the National Book Critics Circle Award and the Pulitzer Prize for Fiction, the most talked about--and praised--smash hit of 2007 follows the adventures of a sweet but disastrously overweight ghetto nerd plagued by a family curse. Read More

Winner of both the National Book Critics Circle Award and the Pulitzer Prize for Fiction, the most talked about--and praised--smash hit of 2007 follows the adventures of a sweet but disastrously overweight ghetto nerd plagued by a family curse. Read Less

All Editions of The Brief Wondrous Life of Oscar Wao

This Is How You Lose Her

This Is How You Lose Her

The book is worth buying. If you choose to purchase this book you will not be disappointed.

This is a unique voice telling a fascinating story about a part of the world most non-Dominicans won't have heard much about. It made me feel ashamed about my own lack of awareness but also spurred me to think more about other repressive political histories and diasporic peoples. I listened to it on cd's and found it particularly moving to hear the occasional Spanish words uttered by someone who gave them the emotional inflection that made their meaning clear, even to a non-Spanish speaker. This is one of the best books I've "read" (or heard) in years.

Don't get swept away by the hype

'Oscar Wao' is indeed a very good book, but it has gotten such praise, awards and - frankly - hype, that for me it slightly failed to live up to expectations. It is a wonderful story - a small story wrapped inside what amounts to a recent history of the Dominican Republic - about a loner 'dweeb' named Oscar. (Wao is not his real last name, but I'll let the story tell you how it became his nickname since it's pretty funny.)

The book is quite stylized in the way the story is told, and the changing narrative, the use of Dominican slang (without translation) and the pop culture references to Dungeons and Dragons and Tolkien may turn off as many readers as it engages. It's not a novel that has true mass appeal. But Junot Diaz is a talented storyteller, and the book is a solid, often spectacular piece of evidence of this. It just might be QUITE as wonderful as everyone is telling you - buyer beware. Still, I enjoyed it very much and do recommend it.

So what are those DomiCans about?

This shy author's on stage demeanor completely belies the torrid and fantastical population that inhabits and suffuses this novel with Caribbean angst and sex. A dweeb he might be personally, but Diaz is the new generation of nano Latins writing and beguiling their audience with life tales of the post Trujillo dictatorship NuevoDoms. Combining Jersey 'hood antics with traditional Hispanic family systems psycho terror, the "hero" of this book can't help but head toward oblivion, a Carib tragedy that started the day he was born to struggling illegal immigrants making the dream happen in Mammon's shadow across the Hudson. Pluses: occasional footnoes with popularized historic summaries of the DR. Minuses: Lots of DomRep 'hood slang that he should have footnoted for the non Jersey Latino hipsters( shame on the editors). Minor point as I contemplated the sweep and agility of Diaz' lingo prose. And for a real feel for the precarious existence of Third World wannabees, it is superb. Even better at the end of this thoughtfully concise novel (Grisham hope you're listening) the reader feels like he/she has lived a full life, not the short years of the main character, but the whole gang. Frankly, I felt relief when the guy takes his final bow, his obsessive/compulsive kamakazee personality receiving its just due. To that extent, he seemd incredibly naive, stupid, and plain self immolating, but then, ain't love worth it all?
Can't wait to see what new Hispanic substratum Diaz digs up next.

Am I Missing Something?

I just do not get what the big deal is with this book! I have not read Diaz's previous book, Drown, so maybe something there identifies him as a major talent, but I'm sorry to say I don't get that impression from this novel.

The story is slow moving, it jumps forward and backward through time, and changes character points-of-view at random, often without identifying which character is speaking. But the most egregious thing is that for the entire first half of the book, the author maintains a third-person omniscient narrative voice. Then all of a sudden the "narrator" is actually a character in the story? And maybe it's implied that the narrator is the one writing the story? What? In addition to which, the narrator-character boils down to exactly this: "I am a Dominican man, therefore I like to chase girls and get laid." What?? As a matter of fact, all the characters are fairly one-dimensional (the mother is a bossy shrew, the sister is stubborn and ambitious, Oscar is a nerdy loner, etc).

The only thing I enjoyed (and believe me, I use that term loosely) in the book were the historical bits about the Dominican Republic during the reign of the dictator Trujillo.
In all, I wouldn't recommend the book and I certainly won't read it again myself. I did finish it, but it was a chore to plow through and when I was finished I just felt relieved to have done with it. Sorry.