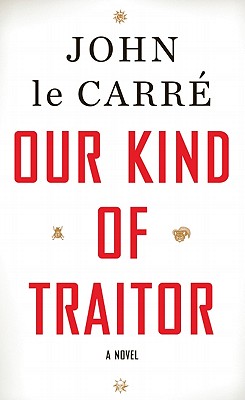 "Published in 2011 by arrangement with Viking"--T.p. verso. Read More

"Published in 2011 by arrangement with Viking"--T.p. verso. Read Less

All Editions of Our Kind of Traitor

The Spy Who Came in from the Cold

Agent Running in the Field

The Girl Who Played with Fire

The Girl Who Kicked the Hornet's Nest

His Kind of Venom

Once again Le Carré displays his superb skill as a storyteller, but again he ruins his story through a pervasive bitterness toward the West; i.e., Britain and America, and their governments. What was a tolerable skepticism in his early works (cf. The Spy Who Came in from the Cold) has become virtually an obsession, and this work only leaves a sense of the sour venom that motivates its author.

Not my cup of tea

It was a disappointment. The most boring book I have read of late. Was there a point to it?

one of his better books in a while. Great storytelling.