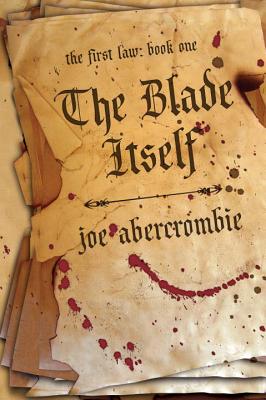 Unpredictable, compelling, wickedly funny, and packed with unforgettable characters, The Blade Itself is noir fantasy with a real cutting edge. Read More

Unpredictable, compelling, wickedly funny, and packed with unforgettable characters, The Blade Itself is noir fantasy with a real cutting edge. Read Less

All Editions of The Blade Itself

The Trouble with Peace

The Wisdom of Crowds

The Name of the Wind

Truly epic characters in a nicely coherent fantasy world. This series revels in the flawed hero & sympathetic villain - if you can even tell them apart... There is nothing black or white in this gritty series. Deeply interesting characters, excellent dialogue, and a very satisfying rip-roaring adventure coupled with a dark, dark sense of humour. Highly recommended.

The Blade Itself, The First Law: Book 1

Truly a great debut novel! The characters are fantastic; Glokta is by far my favorite even though he?s a villain. The action is vividly gruesome, full of violence and fowl rage. A must read for anyone who is a fan of Raymond E. Feist or R. A. Salvatore.
Logen Ninefingers, a barbarian, whose misfortunate leads him to Bayaz, the First of the Magi. His wife and children are dead, returned back to the mud. His friends, the Named Men are dead, too. Logen is alone and trying to find a reason to continue fighting, after narrowly escaping his death fall, and defeat Bethod, King of the Northmen, and former fellow Named Man, with his sorceress Caurib. Bethod has declared war on the Union.
Captain Jezal dan Luthar is a nobleman who has everything given to him by his father. All he cares about is playing cards, his looks, and women. He dreams of glory and status by winning the summer Contest his father has entered him into, and with only a few days to defeat the giant champion. He finds himself trapped because he falls in love with Ardee, Major West?s sister and Jezal?s fencing trainer. But she is a common peasant and he is a nobleman. They can have no future together.
Glokta is an Inquisitor with nothing to lose. Teeth missing, a leg that is dead and gives him constant pain, and toes missing on his foot, a pain up his spine and neck like an inferno, he is a cripple who is at the center of the conspiracy of the Closed Council. No matter how badly and grotesque the torture he gives, he is still the cripple whose life was stolen from him. He was once handsome, smart, one of the best soldiers in Adua, in love, and honorable. But that was before he was captured and tortured during the war.
Ferro Maljinn is assisted in her escape from the Eaters, by magi Yulwei. Ferro is a ruthless killer whose heart is set on revenge against all of Gurkhul.
Logen and Bayaz reach the Agriont. Bayaz is back to reclaim the empty seat on the Closed Council, he left hundreds of years ago. The Northman learns that he hates everything about civilization.
Jezal?s time of glory finally arrives, but can he claim it on his own? He desperately and selfishly wants to be known as the greatest fighter in the Agriont, when he goes off to Angland, to war! But does he want that more than his love for Ardee?
Glokta, having defeated the Mercers? in the competition for the seat of Lord Chamberlain, is now under the direct power of the Arch Lector, to disprove the claims of the returned Bayaz.
The House of the Maker is breached. Lives are turned upside-down towards utter destruction, because of Kanedias. The deceit of the Inquisition grows deeper against the banks and the disappearance of the Lord Governor in Dagoska.