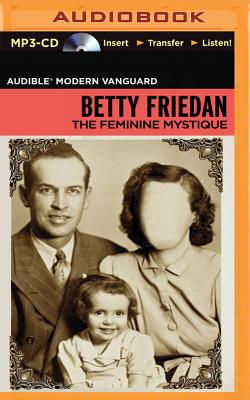 Landmark, groundbreaking, classic -- these adjectives barely describe the earthshaking and long-lasting effects of Betty Friedan's The Feminine Mystique. This is the book that defined "the problem that has no name," that launched the Second Wave of the feminist movement, and has been awakening women and men with its insights into social relations, which still remain fresh, ever since. A new introduction by the bestselling author Anna Quindlen traces the book in her own story and how it was prescient on consumer culture as ... Read More

Landmark, groundbreaking, classic -- these adjectives barely describe the earthshaking and long-lasting effects of Betty Friedan's The Feminine Mystique. This is the book that defined "the problem that has no name," that launched the Second Wave of the feminist movement, and has been awakening women and men with its insights into social relations, which still remain fresh, ever since. A new introduction by the bestselling author Anna Quindlen traces the book in her own story and how it was prescient on consumer culture as well as domestic issues. "Betty Friedan has been and remains a bridge between conservative and radical elements in feminism, an ardent advocate of harmony and human values." -- Marilyn French, Esquire "One of those rare books we are endowed with only once in several decades, a volume that launched a major social movement ...Betty Friedan is a liberator of women and men." -- Amitai Etzioni, author of The Spirit of Community: The Reinvention of American Society Read Less

All Editions of The Feminine Mystique

The Problem That Has No Name

A Room Of One's Own

The Beauty Myth: How Images of Beauty Are Used Against Women

Should be read by every woman and anybody who wants to know where the women's movement came from.

Actually, I hate the term Generation X, but it's a handy and recognizable shorthand for my age group.

Anyway, on to the book. Someone once said that a SAHM's blood would boil as she read this book. While I was irritated by it in many respects, I actually found little that I disagree with in the book.

Betty Friedan's contention that education is essential to freedom and the ability to develop one's human potential is one I wholeheartedly endorse. I thought her dissection of Freud and his misuse in American popular culture was really good. Helpful to a layperson who has really only heard the misuse of his theories. (She has a degree in Psychology.)

One thing that bugged me was how the "feminine mystique" and the prison it supposedly built for women was somehow society's fault. She recounted tale after tale of women who consciously made the decision to quit school, not be serious about college, or derail their own career/achievement track and fit into the housewife stereotype. Friedan herself admits to giving up a promising internship for these reasons. I don't doubt for a minute that there was relentless social pressure to fit a certain mold. But the women Friedan is talking about were the privileged few who made it to college. They had the brains and motivation to get that far.....these were not downtrodden people who had no choice but to submit to some stupid, artificial contruction of who they should be. If they chose to do that and then were unhappy, whose fault was that? And should the government be funding a "mothers' GI Bill" as she proposed in order to save people from the consequences of their own free choice?

Another thing that bothered me is that she talks about nursery schools or daycare like they solve a problem. Women with children can complete their education or pursue careers because of such "help." Does she really believe that a child's own parents are that insignificant to his/her development? It doesn't matter if both Mom and Dad are gone for hours and hours on end, even to an infant, as long as some placeholder is there? Unfortunately, in this area, it seems Friedan's thoughts on the matter have become mainstream opinion. Research is regularly chipping away at the truth of that idea, but how quickly do we see anything changing? How this idea came to be so well accepted is beyond me.

She keeps making the distinction throughout the book between housework/childcare and "meaningful" work that is valuable to human society. Tell you what, I'll give her the housework thing. It is a necessary evil, drudgery to be completed as quickly as possible. I am not going to glorify waxing floors or ironing underwear! (Does anyone do that anymore? I hope not!!) But for childcare to be lumped in with the mindless tasks we all must do to maintain our homes...... She seems to think child care is all about diapers. Not once does she ever mention the joy that comes from helping to guide a brand new person's development, watching learning, or receiving love. Not once does she ever say that raising the next generation is work that contributes to society. She seems to think that staying home with ones children automatically turns a woman into a neurotic, castrating, clingy, critical monster who cannot appreciate anything about her children or allow them to grow up. That contention I have MAJOR problems with.

Finally, this book really is very classist. Her ideas, if they apply at all, apply only to those middle class and above women who had the rare opportunity to go to college. She deplores, at one point, someone telling a woman who went to college that maybe after her kids are grown she can get paid work as a housekeeper, because she will be an expert with so many years' experience. But in the same book, she suggests that women hire cleaning ladies to free them up to complete their educations. So being a cleaning lady is beneath the women Friedan is writing to, but not beneath other women? Who are those women upon whom it is okay for other women to tread in order to fulfill themselves? And if childcare is so mindless and devaluing, who are the women who run the nurseries and daycares? Why is childcare beneath Friedan's audience, but not those women?

I think she concentrates a little too much on the influence of "women's magazines" on how real women thought. I'm sure those magazines were well read, just as some of them are today. But how much do they influence the way people structure their lives? Is someone really going to make life decisions based on what some magazine says, if it is really against their beliefs or preference? Is someone's self image going to be dictated by the usually bad fiction published in such venues?

All my life I have heard of this book but never read it. It is supposed to have been the seminal (for lack of a feminine equivalent - ovinal?) book of the second wave of feminism. I took at least two classes that might be construed as "women's studies" in college and we never read this book. So I wanted to read it for myself. I must say the generation gap shows. There is a lot in that book I just don't get. But perhaps that shows how effective it was. I can't relate to the cage Friedan describes, and I am eternally thankful for that. I never had a societal message put into my head telling me that it was "unfeminine" to be smart, educated, and to fulfill my potential. I was never told that I shouldn't compete with men. In fact, societally, I was discouraged from the profession I have chosen....the same one Friedan decries as dehumanizing. Maybe that's part of why it is fulfilling for me, because it was a free choice for me, even a countercultural one. And because there is no bar to me pursuing my own interests or furthering my education because I have chosen it.

If, and that's a big if to me, the social construct of femininity was as restrictive, debasing, and unfair as Friedan describes, I can only celebrate its demise. I am just not sure things were quite as bad as she makes them out.

Betty Friedan certainly isn't out of date. The Feminine Mystique is a must read for any human being- it provides fantastic insight into the construction of gender roles and the ramifications of adhering to 'the Feminine Mystique'.