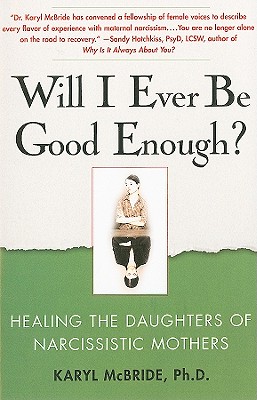 Will I Ever Be Good Enough?: Healing the Daughters of Narcissistic Mothers

The first book for the millions of daughters suffering from the emotional abuse of selfish, self-involved mothers, "Will I Ever Be Good Enough?" provides the expert advice readers need to overcome debilitating histories and reclaim their lives. Read More

The first book for the millions of daughters suffering from the emotional abuse of selfish, self-involved mothers, "Will I Ever Be Good Enough?" provides the expert advice readers need to overcome debilitating histories and reclaim their lives. Read Less

All Editions of Will I Ever Be Good Enough?: Healing the Daughters of Narcissistic Mothers

Will I Ever Be Free of You?: How to Navigate a High-Conflict Divorce from a Narcissist and Heal Your Family

Mi Mama No Me Mima

Will I Ever Be Free of You?: How to Navigate a High-Conflict Divorce from a Narcissist and Heal Your Family

Mothers Who Can't Love: A Healing Guide for Daughters

Why Is It Always about You?: The Seven Deadly Sins of Narcissism

Children of the Self-Absorbed

Children of the Self-Absorbed: A Grown-Up's Guide to Getting Over Narcissistic Parents

I called it "Snow White" syndrome

Even the title was enough to make me check this book out. As soon as I read the first two pages (and got tears in my eyes) I rushed online to buy a copy for my sister! Now I have a friend I'm thinking may need this book as well. And I haven't even finished it yet myself. But WOW to see myself in the words of others within the book, to see that even though I was able to pull away, there are still some issues I have to deal with. This pointed them out in a user-friendly way. Hopefully the final chapters all they've promised to be. Time to get it finished!

Karyn McBride's book, "Will I ever be good enough" is one of those rarities of the self-help genre. Simple enough for the layman to understand with a firm basis in modern psychology and psychoanalysis. Before reading this book, I was involved in a divorce and someone suggested this book to me. I was skeptical that my mother was a narcissist because I had preconceived notions of what that meant. However, this book really hit home. McBride's descriptions, examples, and insights into the daughter of a narcissist's feelings of worthlessness and pain were dead on target. The book is clearly organized and has well-defined action steps as to how to overcome the issues involved. This book helped me tremendously and I would highly recommend it to any woman with adult feelings of worthlessness, inadequacy, and extreme neediness. You may not realize that your mother had narcissistic tendencies, but McBride's book will give you more clarity on the topic.

I also want to respond to the reviewer Newswriter who gave this book 1-star. I completely disagree with your assessment and feel that your criticism is misplaced. The focus of "Will I ever be good enough?" is "Healing the *daughters* of narcissistic mothers." McBride clearly states that this is a self-help book on helping daughters heal from the abuse of a mother that is either clinically narcissistic or even if not diagnosable, has significant narcissistic tendencies. Your criticisms that the underlying biological and genetic causes of narcissism are not addressed are irrelevant. This book was not intended to and never claimed to be an analysis of the Mother's narcissism per se. There are many other fine books that do so. That is not the book McBride set out to write. McBride clearly explains her approach as helping the daughter of narcissism and utilizes an eclectic mix of behavioral, psychodynamic, and interpersonal psychotherapeutic approaches to do so. Citing the absence of lengthy discussions of the causes, extent, and precise diagnosis of the mother's narcissism is actually appropriately omitted - believe me: narcissistic daughters are well aware of these issues and are sick and tired of hearing how "your mom can't help it". That in itself is narcissistic, shifting the focus from the daughter's pain, to the mother's illness. Bravo to McBride for avoiding the trap of getting caught up in the mother's narcissism and instead staying true to the goals of "Will I ever be good enough".

This is a book that can really help and I highly recommend it.

This book is too simplistic.

This book fails to delve into the latest scientific theories regarding the root causes of Narcissistic personality disorder.

It also fails to offer ways to stay connected to a mother with narcissism. Because of that it appears to demonize the narcissist by failing to fully acknowledge that the narcissist is suffering from a profound mental illness with multi-factorial roots.

Those, roots, according to many mental health professionals, may be genetic, or due to brain injury, or caused by severe physical or sexual abuse.

The book's tone, also, in my opinion, victimizes the daughters of narcissists who wish to find ways to continue to interact with their narcissistic mothers.

The victimization takes the form of neglecting to emphasize the fact that the mother has a likely mental illness.

Also the book does not contain enough guidance on how the daughter can set firm boundaries with the mother as a way to remain connected on some level with a mentally ill mother, if she chooses to. It also fails to encourage the daughters to accept that the mother may have a severe and perhaps incurable mental illness. A fact that may help release many of the daughters of narcissists from self blame or the feeling that the daughter is some how causing the mother's behavior. It may also release them from much of the confusing anger and blame that daughters of narcissists feel toward their mothers.

I think I would be remiss to not mention the website and support forum associated with this book, as the two appear under the same title and along with advertisements for the book. The forum is largely un-moderated.

The forum also offers further insight into the authors mindset toward narcissism. And also solicits customers for seminars, phone counseling and group therapy.

The un-moderated forum, however, appears to be a free-for- all populated mainly woman who claim to have been sexually and severely physically abused by the narcissistic mothers.

In my opinion a narcissist who engages in profound physical and sexual abuse is likely a mother with very different mental health issues that go beyond pure narcissism, such as anti-social personality disorder, sociopathy or psychopathy.

This distinction, however, is not emphasized at the forum.

Any suggestion to that effect at the forum is ridiculed as condescending and too high brow and the poster is ostracized.


These posts are never removed. In addition, although the forum claims to be open to varying viewpoints the forum is very rigid.

Anyone who attempts to discuss the latest scientific finding or discuss the fact that Narcissism is a mental health issue is ostracized.

It appears that those wishing to remain in contact with a narcissistic mother or to examine the mental health aspects of narcissism will be diagnosed by other forum members as being co-dependent and having Stockholme syndrome, at this un-moderated forum.

When I entered counseling trying to figure out what emotional truck had hit me and why, my counselor suggested my mother might be narcissistic, and said I needed to start reading about it so I'd know the details of the situation.

This book was one of the most helpful I've read out of about a dozen. I even bought a second copy and sent it to my sister!

I highly recommend this book, it's readable, detailed, and I felt I could identify with most of it -- it was intelligent without being esoteric, learned without being difficult, and page after page I found myself saying, "AH HA!" and understood yet another aspect of what I've gone through and still have to face with my mother.

Definitely worth the price of the book and shipping!