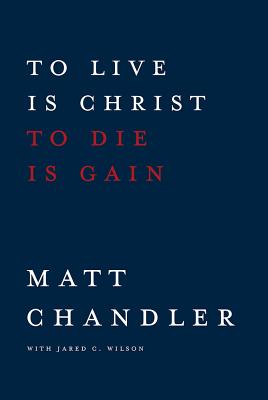 To Live Is Christ to Die Is Gain

All Editions of To Live Is Christ to Die Is Gain

The Mingling of Souls: God's Design for Love, Marriage, Sex, and Redemption

Recovering Redemption: A Gospel Saturated Perspective on How to Change

Take Heart: Christian Courage in the Age of Unbelief

Follow Me: A Call to Die. a Call to Live.

The Insanity of God: A True Story of Faith Resurrected

The Mingling of Souls: God's Design for Love, Marriage, Sex, and Redemption

Recovering Redemption: A Gospel Saturated Perspective on How to Change

Chandler wrote this book "to invite readers into authentic Christian maturity," and looks at some of Paul's themes in Philippians, a letter written to help grow one to maturity, unity, and contentment in Christ

The Chocolate Milk
The book really began opening up on chapter 4. Ch 4 is about showing humility to a world that wants to show off. Yet do we follow God for a nice earthly mansion, or because of who He is and what He's done? The life of humility is based on the cross of Christ.

Ch 5 was about yearning for a relationship with Christ over trying to be good for Him. Chandler tries to do away with living to be a better person over knowing God. "It's the difference between obeying to be accepted and obeying because we are accepted" (78).

Chandler advocates for being content in Christ and discontent in our imperfect selves. Strive for perfection to get stronger in our weaknesses (prayer, studying, evangelism, serving, etc), knowing God will use us despite our weaknesses.

Chandler's book is theologically sound. His points and arguments come from Scripture, his examples are interesting and to the point, and he's level-headed with common sense.

The Spoiled Milk
A mere few times Chandler doesn't explain the cultural context which would help with the application.

This book would be geared more toward any member of the church, especially youth and college age. It can be hard to find his main point, but there are plenty of good tidbits and ideas.