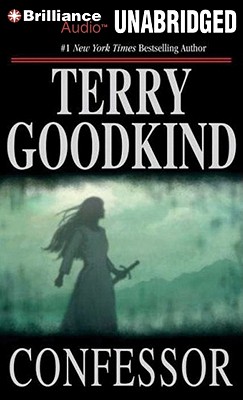 Descending into darkness, about to be overwhelmed by evil, those people still free are powerless to stop the coming dawn of a savage new world. Join Richard and Kahlan in the concluding audiobook of one of the most remarkable and memorable journeys ever produced. Unabridged. 2 MP3 CDs. Read More

Descending into darkness, about to be overwhelmed by evil, those people still free are powerless to stop the coming dawn of a savage new world. Join Richard and Kahlan in the concluding audiobook of one of the most remarkable and memorable journeys ever produced. Unabridged. 2 MP3 CDs. Read Less

All Editions of Confessor

Temple of the Winds: Book Four of the Sword of Truth

Faith of the Fallen

A Feast for Crows

Awesome (in the full menaing of the word)

Confessor was a truly amazing conclusion to the Sword of Truth series. I was actually a little apprehensive before I began reading the book because I had heard that there were a number of scenes describing men playing "Ja La D'Jin," a favorite sport of the villain, and as a reader, I find scenes involvi9ng sporting events to be rather boring. I was completely wrong. As it turned out, the scenes involving "Ja La" were among the best written in the series.
Goodkind also did a wonderful job (not only in this book, but in the entire Chainfire Trilogy) of bringing back every character that had appeared in the previous books and giving them a semi important deed for them to fulfill. It was also impressive how he orchestrated every event that had happened in the series, even the infinitesimally small events that you would have thought meant nothing, and made them drastically important to bring the prophecy to the right fork.
Overall, I think that this was the best possible ending you could imagine, plenty of twists, encounters that ended in ways you would not have thought, and small cliffhangers giving you insight as to what the sequel to SOT might be about.
This was a truly amazing book and series.

I have read the whole series and i have to agree that with this last book i really remembered the first books (which in my opinion were the best). It was a beautiful book just like the rest of them, but i must say that i wasn't exactly content with the ending. I was hoping for more details on how Kahlan and Richard's life would turn out, but it was still great.
<3

Terry Goodkind is back to his original writing

I believe that Terry Goodkind has brought back his writing style from his early writings like Wizards First Rule. This book is exciting and enjoyable. Edge of your seat feeling that makes it hard to put the book down.

I Loved this book! It was so worth waiting for. I love reading books that the characters are continued into more books. Terry Goodkind is an excellent author. He continues his storyline flawlessly! The whole series is wonderful. Now that I have the complete set, I will reread it from start to finish.