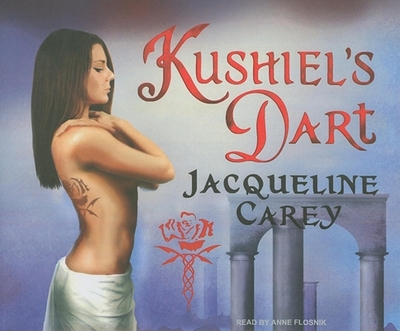 A nation born of angels, vast, intricate, and surrounded by danger; a woman born to servitude, unknowingly given access to the secrets of the realm; and a plot borne of evil, too cunning to be fathomed, too deadly to be known. These are the basis of this award-winning first entry in the fascinating Kushiel's Legacy series. Read More

A nation born of angels, vast, intricate, and surrounded by danger; a woman born to servitude, unknowingly given access to the secrets of the realm; and a plot borne of evil, too cunning to be fathomed, too deadly to be known. These are the basis of this award-winning first entry in the fascinating Kushiel's Legacy series. Read Less

All Editions of Kushiel's Dart

Don't be fooled by the cover

I am so glad to have discovered Jacqueline Carey and her "Kushiel's Legacy" series, which begins with "Kushiel's Dart." I've always been an avid reader of sci-fi and fantasy, but in recent years I've branched out to read a lot more "regular" fiction as well as other types of genre fiction (gothic, thriller, espionage, etc) and the only unfortunate side effect of being more broadly read is that I've become a lot pickier about what I read in general, but especially when I return to the fantasy genre. Let's face it. There is a LOT of bad fantasy out there, and it can be a little difficult to sift through it all to find a good level of craftmanship and story without doing a bunch of research online before heading to the store (or site...). I picked up "Kushiel's Dart" due to a staff recommendation tagged on the shelf, read the back, hemmed and hawed a little, read the first few pages, carried it around the store for awhile, then put it back and ended up getting it from the library.
This is because I just could NOT decide based on the back of the book and the cover (which is a pretty corny cover complete with red foil stamping and a shirtless woman) whether this was thinly disguised erotica, or if it was a ridiculously brave and ingenious idea.
Luckily for me, it was the latter! The world Carey has created is unique, rich, and believable, and the heroine is well worth championing. Yes, there is sex here, but it isn't nearly so overt as I was expecting, given that Phèdre nó Delaunay is a courtesan. Not only that, but she is a masochist, or an "anguisette" in the parlance of her world. The genius of Carey's work here is that because Phèdre enjoys her work, the taboo aspect of it falls away rather quickly, and her sexuality is not a vulnerability, but instead just part of who she is. (It also helps that very few of the scenes of a sexual nature are particularly explicit). This frees up the reader's attention for the meat of the story. Phèdre is not just a courtesan; she has been trained to observe, analyze, and remember details. Essentially, she is a spy, and an extremely effective one. This leads her into the depths of her country's political turmoil. When she stumbles into a plot against her beloved country, she uses her unique capabilities to work for the preservation of her queen and her homeland.
Of course, "Kushiel's Dart" is not perfect. There are some characters who I wished would have had a little more development, and there are some signs of the first time author, but overall, Carey is just so inventive that I have to forgive her. I will be following the rest of the series to see how she grows as an author and to follow the intriguing, unusual character of Phèdre.

Kushiel's Dart is the beginning of an interesting series that explores convoluted mysteries in an interesting fashion. The main character, Phedre, is a multi-laytered character who happens to be a creature who desires sexual domination. Carey has created a woman who's cultured, sensual, sexual, as well as a bit depraved; but Carey has developed a softer side of Phedre...one who years for acceptance and love. This book starts us on a journey of exploration of the darker side of humanity, but with the hope of something god-like in ourselves. Wonderful book, awesome series!