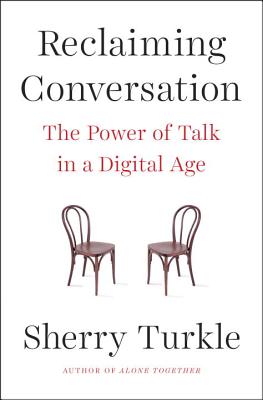 Reclaiming Conversation: The Power of Talk in a Digital Age (UK edition)

Argues that today's digital culture is undermining relationships, creativity, and productivity, and pushes for the return of face-to-face interaction among people. Read More

Argues that today's digital culture is undermining relationships, creativity, and productivity, and pushes for the return of face-to-face interaction among people. Read Less

All Editions of Reclaiming Conversation: The Power of Talk in a Digital Age

Alone Together: Why We Expect More from Technology and Less from Each Other

Evocative Objects: Things We Think with

Life on the Screen

The Second Self: Computers and the Human Spirit

The Glass Cage: Automation and Us

The Shallows: What the Internet Is Doing to Our Brains

The Utopia of Rules: On Technology, Stupidity, and the Secret Joys of Bureaucracy

An Ugly New World is Here

This is a terrifying book; it cautions us about what we are becoming and the consequences of our actions. Sherry Turkle zeroes in on digital media and how it is affecting adults and children. The picture is very ugly.

Early in the book, teachers solicit the author's expertise because they see that their middle-aged students lack empathy towards each other. They want to interact with their digital gizmos rather than talk with each other.

Then the author discusses the the concerns of a growing number of academic professors; with digital devices in the classroom, inattention is rampant. When college students get together, they always have their cellphones. No matter what they are doing, they check their phones almost constantly. When the author asks why they check constantly, they say that they might have an email. Thus, they have their phones within easy grasp 'just in case someone wants to communicate.' The phones are on the dining table, interrupting family or friend communication.

CEO's are already complaining that their new hires have to be coddled and given warm fuzzies throughout a project. These new-hires have grown up on Facebook and need constant positive regard and encouragement. Facebook encourages positive postings; the members have become addicted to getting positive reinforcement from others.

The new horror in our culture is 'being bored.' So our digital devices give us an out - so we have no quiet time or boring minutes. Huh? Thinking and creativity requires one to quietly think. Creative solutions come from realizing that we need to do (think, say) something differently.

As I was reading this book, I looked out over the restaurant where I was having lunch. Parents were ignoring their children while they checked their phones, called or texted. Teens were partially-listening to their companions while they constantly interacted with their phones. Please note: This wasn't at a table or two; it was throughout the building. I've learned three major things from this book and my observations:
1) Thank goodness I'm retired and am not in this rat-race of constant communication.
2) It is a shame that I've retired because a good many of these people (the smart ones) are going to wind up in therapy for phone addiction. (I was a therapist.)
3) Bizarre behaviors and serial killings will only increase; children are routinely ignored because their parents are interacting with their phones and not their children. Granted, most children will just emulate their parents and become part-time friends/members in a relationship/parents to a new crop of ignored children. (Remember Harry Chapin's song 'Cats-in-the-Cradle?'*) But there are enough fragile personalities who will rebel against such inattention and do the unthinkable.

Relationships are going to become more fragmented. Teens and college students already talk about not being interested in communication without their devices. They break up by texting because they don't want to get into messy emotions. What a scary world.

I downgraded the book because the author was so wishy-washy about solutions. What about cellphone-free meals? What about device-free classrooms? The problem is that the adults are unable to control themselves and they are afraid to be the ogre-in-the-room limiting phone usage in their children. No one wants to be the 'mean parent in the neighborhood.' When did parenting become a popularity contest? I shudder for the next generation.

My child arrived just the other day
He came to the world in the usual way
But there were planes to catch and bills to pay
He learned to walk while I was away
And he was talkin' 'fore I knew it, and as he grew
He'd say "I'm gonna be like you, Dad
You know I'm gonna be like you"

And the cat's in the cradle and the silver spoon
Little boy blue and the man on the moon
When you comin' home, Dad
I don't know when, but we'll get together then
You know we'll have a good time then

And the cat's in the cradle and the silver spoon
Little boy blue and the man on the moon
When you comin' home, Dad
I don't know when, but we'll get together then
You know we'll have a good time then

Well, he came from college just the other day
So much like a man I just had to say
"Son, I'm proud of you, can you sit for a while"
He shook his head and said with a smile
"What I'd really like, Dad, is to borrow the car keys
See you later, can I have them please"

And the cat's in the cradle and the silver spoon
Little boy blue and the man on the moon
When you comin' home son
I don't know when, but we'll get together then, Dad
You know we'll have a good time then

And the cat's in the cradle and the silver spoon
Little boy blue and the man in the moon
When you comin' home son
I don't know when, but we'll get together then, Dad
We're gonna have a good time then