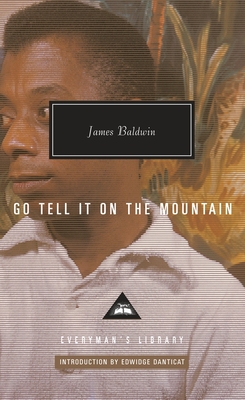 Go Tell It on the Mountain

Originally published in 1953, this is "a hardcover edition of James Baldwin's classic coming-of-age novel set in Harlem in the 1930s, with a new introduction by Edwidge Danticat"-- Read More

Originally published in 1953, this is "a hardcover edition of James Baldwin's classic coming-of-age novel set in Harlem in the 1930s, with a new introduction by Edwidge Danticat"-- Read Less

All Editions of Go Tell it on the Mountain

James Baldwin: Collected Essays (Loa #98): Notes of a Native Son / Nobody Knows My Name / The Fire Next Time / No Name in the Street / The Devil Finds Work

I Am Not Your Negro: A Companion Edition to the Documentary Film Directed by Raoul Peck

Nobody Knows My Name

Going to Meet the Man: Stories

At The Temple Of Fire Baptized

James Baldwin's first novel, "Go Tell it on the Mountain" (1953) is set primarily in a storefront African American Pentecostal church in Harlem in 1935. While the book explores the role of religion in African American life, its portrayal of religion is broader. The book also offers a portrayal of race relations in the United States, both North and South, through the first half of the 20th Century. The novel has an autobiographical component and is in part a coming of age story.

The book focuses on young John Grimes. who has just turned 14 when the story begins, and on his family. Besides John, the primary characters are Gabriel, a deacon at the Temple of Fire Baptized and formerly a fiery southern preacher, Elizabeth, John's mother, and Florence, Gabriel's sister and thus John's aunt. Each of these three people spent their early years in the South and ultimately found themselves in Harlem as part of the Great Migration. There are a host of other important characters in the book, including several other children of Gabriel and Elizabeth and Elisha, 17, a preacher at the Temple of Fire Baptized and John's friend, to whom John appears to have an attraction.

The book is in three parts. The first part "The Seventh Day" critically sets the stage for the book. It takes place in the Grimes' poor apartment on John's birthday as his younger brother, Roy, comes home with a stab wound. As the story unfolds, it develops that Gabriel had an earlier son, Royal, who died young from a stabbing in the throat. The family life is harsh and tense and filled with seething. After a scene of violence in which Gabriel strikes his wife, the scene shifts to the Temple of Fire Baptized for the Saturday evening service. It is the expressed wish of the family that John, a quiet, small, intelligent boy will find God and be saved.

Part two of the book, "The Prayers of the Saints" is the heart of the novel. The "Saints" are Gabriel, Florence, and Elizabeth. As they pray that Saturday evening, their minds are filled with flashbacks of their earlier lives and relationships to each other. They grew up against a backdrop of racism, but there is much more to each of their stories.Each of the three carry heavy burdens, and none more so that the preacher, Gabriel. Their stories are vividly told and poignant.

In the final part of the book, "The Threshing Floor", John has his epiphany and salvation experience. This experience is ambiguous in character and the reader is left in skepticism about whether one would wish for such an experience or rely upon it if it happened. Baldwin describes it vividly. In a sleeting March early morning following John's conversion experience, family tensions again rise to the fore, especially in the continued angry and hateful relationship between John and Gabriel.

Baldwin writes with great detail in examining places, North and South, and character. The sentences are long and filled with extensive adjectives, repetition, and force. The book is replete with Biblical allusions. The narrative voice is in formal, correct American English. In the passages of dialogue, Baldwin captures the rhythmic, colloquial capture of African American speech of his time.

The novel takes a complicated view of religion. As a young man, Baldwin himself left the church where he had been an adolescent minister and never again professed adherence to any organized religion. Much the book portrays religion as sexually repressive, superstitious, and hypocritical. There is a suggestion as well that the African American churches discouraged their adherents from addressing the woeful discrimination against them. Yet there is a sense of mysticism and wonder in this book and of piety beyond the formalities.

I read this novel in a book group that focuses on works written by black people, in the United States and throughout the world. It took a long time for me to find this book. "Go Tell it on the Mountain" is widely regarded as an American classic, and so it is. It deserves the accolades it has received and more.