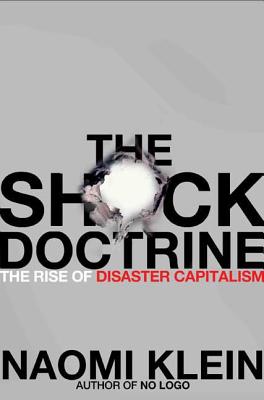 The bestselling author of "No Logo" argues that by capitalizing on crises, created by nature or war, the disaster capitalism complex now exists as a booming new economy, and is the violent culmination of a radical economic project that has been incubating for 50 years. Read More

The bestselling author of "No Logo" argues that by capitalizing on crises, created by nature or war, the disaster capitalism complex now exists as a booming new economy, and is the violent culmination of a radical economic project that has been incubating for 50 years. Read Less

All Editions of The Shock Doctrine: The Rise of Disaster Capitalism

This Changes Everything: Capitalism vs. the Climate

On Fire: The Burning Case for a Green New Deal

How to Change Everything: The Young Human's Guide to Protecting the Planet and Each Other

The Battle for Paradise: Puerto Rico Takes on the Disaster Capitalists

This Changes Everything: Capitalism vs. the Climate

No LOGO: Taking Aim at the Brand Bullies

Blackwater: The Rise of the World's Most Powerful Mercenary Army

Canadian Naomi Klein opens one's eyes to the consequences of Milton Freedman's idea of Capitalism, i.e., unfettered world-wide free trade, plus privatization of almost all government functions, including much of the military, thereby leaving corporations as the real power behind government. Capitalism without a social conscience with respect to the worker bees, who work for slave wages, while the greedy ueber-rich get richer and richer. Prepare to be shocked by this excellently detailed history of Capitalism from the 1950's to the present.

The book "The Shock Doctrine" is the best account I have seen which explains the policy and developments that brought us to the state we find ourselves in today. It outlines the influence that the economic doctrine of Milton Friedman of the Chicago School has had on the growth of privatization, deregulation, and unfettered wealth of corporations at the expense of ordinary citizens, indigenous peoples, and the working class. The book traces developments starting in Chile in the 1970s and continuing through such widespread areas as Latin America, the Far East, Eastern Europe, and the United States (e.g., New Orleans after Katrina).
The Shock Doctrinet is greatly detailed and well researched. For me the content is understandable without much economic background. I have found it invaluable in interpreting current events and trends (even though it was published in 2007) and wish the author would publish a "sequel" to include developments since the book was first published.
I have recommended this book to a number of people and, as a matter of fact, bought this copy to give to a friend. It's well worth the time and effort to peruse this work!

The Shock Doctrine: The Rise of Disaster Capitalim

If someone wants a view of the US govt and others involvement both locally and internationally to maniuplate populations and plan for world wide domination, this is an excellent foundation to which one could expand in many directions. While written on a complex and historic level, this book is an incredible read that walks the reader through sound, researched beginnings into current day events.

The players are listed and parts they played. In today's political and business climate, if you've followed along at all, this will help the piece fall together. Though, being open minded is helpful, the credibility of resources is very strong. Try it. Strenghten your own resolve.

The most important book you'll ever read

In The Shock Doctrine, Naomi Klein clearly and persuasively explains so much of what was always confounding, frustrating, and downright inexplicable, especially the reasons the U.S. almost always pursues immoral, unjust, and counterproductive foreign policies. Once you've mastered the principles Klein sets forth, the workings of the world are relatively simple to understand and predict. Buy several copies of this book, as you'll want to give it to the people who matter most in your life. No one who reads this book will ever look at the world the same way again.

I have expected much more from this book, I didn't finished yet to read it, and I don't think I will.
In my opinion is not very objective, seems to have a tendency against the capitalism for itself, and not for the real problems it brought. People and not the capitalism is the problem.
Even though is always good to read something different.....