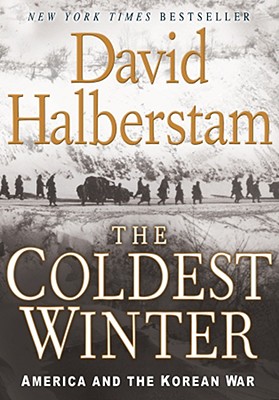 The Coldest Winter: America and the Korean War

The bestselling author of the thrilling work on the Vietnam War, "The Best and the Brightest," offers unrivaled research and formidable journalistic skills to shed light on another dark corner of American history: the Korean War. Read More

The bestselling author of the thrilling work on the Vietnam War, "The Best and the Brightest," offers unrivaled research and formidable journalistic skills to shed light on another dark corner of American history: the Korean War. Read Less

All Editions of The Coldest Winter: America and the Korean War

The Best and the Brightest

The Breaks of the Game

I first listened to this book on audio. It was very good so I bought it for my husband who likes history.

David Halberstam has approached the Korean War as he does all his subjects, with a thoroughness and subjective perspective that brings to life what happened and why. He intersperses personal narratives with the bigger picture, and is not afraid to call it like it was regarding MacArthur, the Republicans and their McCarthyism, Truman, Acheson, etc. Excellent read.

Great book and delivered on time and in great shape. Definitely recommend.

This is a magisterial treatment of the Korean war. It is well written, well researched, and spares no one in
pointing out judgmental errors. It also shows the
hardships endured and bravery demonstrated by those who had to fight the war. More, it describes the political uses made of the war by the politicians in Washington. Not only do I recommend this book, I have given it as a gift to others.

"The Coldest Winter," David Halberstam's final journalistic tribute to heroes, is also a fitting tribute to the men of this forgotten war.
Halberstam's lengthy career in journalism and as an author shows in his brilliant writing style that keeps you engrossed in every word. It is not surprising that someone who has written so much about Vietnam, would have a huge resource to draw upon in a work about the Korean War.
The Coldest Winter is a story that needed telling, much the way Herodotus told of the men of Thermopylae or, more recently how Stephen Ambrose told of the men of Easy Company in "Band of Brothers."
Halberstam understood well how most Americans ignore the events and outcome of the Korean Conflict; often, that part of history seems better left untold. The Coldest Winter tells this story and it's back stories and even it's substantial post-script. We mustn't forget that South Korea's success today owes a debt to the American and U.N. forces who fought there over half a century ago.
What Halberstam also does in this book is point out the miserable failings of Generals like MacArthur, long-time sacred cows of the World Wars, whose hubris in later life jeopardized the legacy of any truly heroic deeds of their early careers. General Ned Almond is also lambasted for his stubbornness and poor leadership style, which Halberstam shows led to unnecessary losses of American and U.N. forces.
While "Coldest Winter" is by no means concise as far as a historiography goes, Halberstam has revealed the machinations that led to the war and the egos that sustained it. This is not a blow-by-blow, battlefield-to-battlefield account of the Korean War, much of the latter part of the war is overlooked. But, it covers the broader picture and the political implications and ramifications of American civilian policy versus military instinct in the early 1950s, however poor it may have served us.
The Coldest Winter is a hefty book, at over 650 pages, broken into eleven sections with over 50 chapters, but it reads as fast as it reads brilliant.
This is the first Halberstam book I have read, I regret that it comes only after his passing. There were certainly more great works to come had he not met his untimely death.
REVIEW EVERY BOOK YOU READ, OTHER READERS, PUBLISHERS AND AUTHORS DESERVE YOUR OPINIONS TOO.