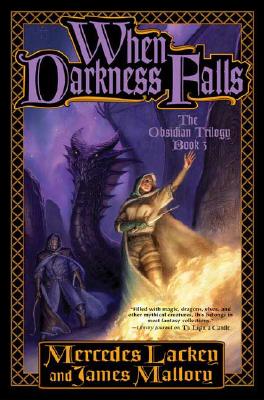 Despite a great working of Wild Magic and High Magic that struck at the heart of the Demon Queen's evil plots, Knight-Mage Kellen and his Elven allies are still seen as enemies by the human Mage Council. The Elves and their allies must find a way to shatter the Demons' hold on the human Mages or the forces of Light will be destroyed. Read More

Despite a great working of Wild Magic and High Magic that struck at the heart of the Demon Queen's evil plots, Knight-Mage Kellen and his Elven allies are still seen as enemies by the human Mage Council. The Elves and their allies must find a way to shatter the Demons' hold on the human Mages or the forces of Light will be destroyed. Read Less

All Editions of When Darkness Falls

Closer to the Chest

After the great spell of Kindolhinadeltil?s Mirror, Kellen learns that Wild Magic and High Magick working together will kill the immortal Demons. With the harshest winter in a very long time only half over, the war is harder to battle and win.
Kellen is still strongly attracted to Vestakia and bonded to Shelkan with the Price of a year and a day of chastity and celibacy. Vestakia remains with the Elven army working with the Crystal Spiders to find the final enclave of Shadowed Elves. (They remind me of the drow.)
Cilarnen can?t do any of the beneficial High Magick without a source to draw power from. He is desperate and asks permission from Kindolhinadetil to use the Elemental Forces/Beings that are the power of the land-wards of the Elven Lands as the source of his power to perform the High Magick. But can he gain permission from the Elven ruler, and can he survive a summoning as dangerous as this?
Jermayan and Ancaladar are used by the Elven army as a kind of chauffer and protector when the King of the Nine Cities orders all the expecting females to the Fortress of the Horned Crown. It is in their evacuation of Lerkelpodara where Jermayan learns of the strong offensive approach the Endarkened are taking in this war. With his Elven Mage magic, Jermayan performs an unbelievable act at the mountain pass that saves those refugees from the lost city of Lerkelpodara. The Nine-now Eight-Cities.
Using a High Magick spell to see into Armethalieh to spy on Anigrel, Cilarnen feels tainted on the inside. By searching his mind where Anigrel was suppose to burn away his Magegift; he discovers that a trap was laid by Master Anigrel. He only laid his Magegift to sleep, until it could be of further use to Anigrel?s Dark Mistress.
Queen Savilla returns to the place of her dark magic working with large numbers of blood sacrifices, in order to reach her ultimate goal of ruling forever not only the World Without Sun, but also the World Above. She means to bring He Who Is back! Prince Zyperis learns of his mother?s intentions and knows what it means for him. He takes the initiative desperate to please her, by starting the plague on the Brightworlders. Just like it was with the first war, the Shadow?s Kiss kills not only warriors but the land too.
With her hard and determined work with the Crystal Spiders, Vestakia discovers that she is linked to her father?s mind. She knows what They will do next in order to win the war. But can he see her mind too?
At the Caverns of Halacira, Kellen?s army not only runs into the last of the Shadowed Elves before Vestakia?s warning arrives, but he succeeds in turning it into a safe refuge, with the help of Jermayan?s great Elven Magic. I wonder if Shelkan?s good luck wish from a unicorn of ,?Good hunting,? (just like in Battlestar Galactica), to Kellen was just what he needed to be successful against such great odds, even with Kellen?s Knight-Mage abilities.
In the battle at the caverns of Halacira, Kellen agrees to another Mage Price, to let go. When he learns from Jermayan that Andoreniel is sick from Shadow?s Kiss, does the Mage Price refer to the King or will the Healers be able to save him? In the meantime, who commands the Elven Army? They will not answer to anyone besides Andoreniel.
The High Magick spell to see into Armethalieh is not only good to find out what is going on behind the walls of the city, but it can work the other way too. Cilarnen witnesses the massacre at the undefended farming village of Nerendale. They put on a bloody show just for him, that Cilarnen would never be able to forget.
With more of the questions about the history of the first war against the Demons being answered, Idalia learns of the Great Summoning. She is able to use one of the places of power on one of the powerful days to summon the Starry Hunt. They are a frightful force of Light that are as many as there are stars in the sky. They are so tremendously powerful that even the Elves are scared of what Idalia has done for their victory against the Dark. This power is as old as the immortal Demons themselves. They hunt down and kill all agents of the Endarkened.
The final battle will have the Elven army at the walls of Armethalieh to defeat Anigral and have the race of men fight along side them against the Demons. Queen Savilla will steal away the one to the place of significant power to make the final sacrifice that will bring the return of He Who Is forever. Idalia is willing, but will be able to pay the Mage Price for the spell she used to end the drought in the Elven Lands? Will Vestakia survive her father?s hunt for her, and will Kellen give up Shelkan so that he and Vestakia may be together, ?When Darkness Falls??