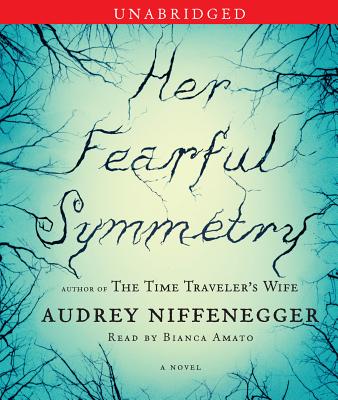 When Elspeth Noblin dies, she leaves everything to the 20-year-old American twin daughters of her own long-estranged twin, Edie. Valentina and Julia, as enmeshed as Elspeth and Edie once were, move into Elspeth's London flat and through a series of developing relationships a crisis develops that could pull the twins apart. Read More

When Elspeth Noblin dies, she leaves everything to the 20-year-old American twin daughters of her own long-estranged twin, Edie. Valentina and Julia, as enmeshed as Elspeth and Edie once were, move into Elspeth's London flat and through a series of developing relationships a crisis develops that could pull the twins apart. Read Less

All Editions of Her Fearful Symmetry

Daybook: The Journal of an Artist

I love this book and have read it 4 times! It is a interesting way to talk about ghost.

Audrey at her best

If you liked Time Travler's Wife, you'll find this an equal joy.

I enjoyed reading this book, though not as much as The Time Travelers Wife. Like that book this has a slightly complicated twisty plot. It involves ghosts, a historic cemetery, two sets of twins, and a macabre plan for a reincarnation/resurrection. It's an interesting story, but also a frustrating and sad one. The (younger) twins, Valentina and Julia, are a little strange. Valentinas' issue with her sister which leads to great tragedy here, is a problem that could so easily been dealt with in a much less bazar way. And the ending (??) was EXTREMELY frustrating. BUT, even with these drawbacks, I'm glad I read it and enjoyed it. There just seem to be too many loose ends and or unfinished issues.

Ghosts, body snatching, two sets of twins, multi-generational family mysteries; a quick plot synopsis of Her Fearful Symmetry by Audrey Niffeneger sounds like the plot of an old-fashioned gothic romance. This book has been anxiously awaited by fans of Niffeneger?s bestselling The Time Traveler?s Wife. Unfortunately, Her Fearful Symmetry lacks the substance and vision which made Niffeneger?s first novel so compelling.

The main characters in Her Fearful Symmetry (two sets of twins, the younger of whom are ?mirror twins?) are self-destructively narrow minded, and the resulting chaos seems contrived; Niffeneger?s excellent prose does little to rescue this plot. Where TTW was a beautiful story of people fighting to make a life for themselves under extremely bad circumstances, Her Fearful Symmetry is a tale of people who create their own hell by tangling their family and friends in a web of deceit which ultimately results in several terrible and unnecessary tragedies.

The only character who really shone in the plot of HFS was Martin, a mentally ill linguist who spends most of the book trying to overcome agoraphobia in order to reunite with his wife. Unlike the other characters in the book, he rises to the occasion and shows true strength of character in his battle against himself.

Overall, the book was a bust. Niffeneger?s writing is excellent, but the plot felt contrived and the characters weren?t believable. Even a genetic time traveling disorder is more plausible than this ridiculous ghost story.