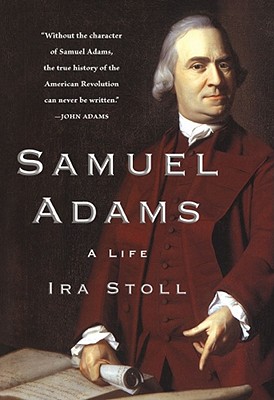 Described in Thomas Jefferson's words as truly the Man of the Revolution, Samuel Adams is now paid his full due in this rousing biography that reveals him as the founding father overlooked by history. Read More

Described in Thomas Jefferson's words as truly the Man of the Revolution, Samuel Adams is now paid his full due in this rousing biography that reveals him as the founding father overlooked by history. Read Less

All Editions of Samuel Adams: A Life

by Jay A Parry

The 5000 Year Leap: A Miracle That Changed the World

A Patriot's History of the United States: From Columbus's Great Discovery to the War on Terror

SAM ADAMS - NOT THE BEER

Mr. Stoll is the Managing Editor of the New York Sun. He is a former resident of Massachusetts and a graduate of Harvard College.

Sam Adams was the cousin of John Adams. He was born on 1722 and died in 1803. We can get one false story out of the way; the beer has nothing to do with his life. His family did have a business related to it, but he was basically not involved.

This book is short (270 pages) and its greatest resource are a lot of great quotes. Sam made his living mainly as a writer for newspapers of his time and serving in elected positions in Boston and for his State/Colony.

Another fallacy that should be dispensed with is that he in any way justified violence to support his views. Many people have been misled that he was in some way implicated in the Boston Massacre and the famous dumping of tea into Boston Harbor. While he did defend those who perished and those who participated he was not personally involved, nor did he encourage the actions.

Sam was probably the earliest of the Founders to see the necessity to break away from Great Britain and he never lacked from courage to tell it like he saw it. He was an extremely hard worker, served in the Continental Congress for seven years. Before and after that he served his state as a Representative, Senator, Lt. Governor and Governor.

Sam was involved in the process of completing the Declaration of Independence and was the primary person to write the Articles of Confederation. He was the most involved person in the writing of the Massachusetts State Constitution. In doing this last he was instrumental in developing the idea of separation of powers, checks and balances. Many of his ideas were included in the writing of the United States Constitution.

Unlike his cousin John Sam was a republican. While he eventually supported the new Constitution in 1788, it was only after a great deal of study to be sure it protected the rights of the people. He broke with his cousin over the Alien & Sedition Act and supported Thomas Jefferson for President in 1800.

Of all the Founders Sam was truly moved by the spirit of God and tested what he did against his faith. This comes out time and again. While his cousin John became a Unitarian, Sam remained a Congregationalist and was often chided as being a Puritan. Even so he believed in religious freedom for all. He was known to be totally trustworthy and incorruptible. He died as poor as he lived.
This book shows, like so many, some of the weaknesses of our times. I have found (again) a lack of understanding of the difference between a Republic and a Democracy. As this is so fundamental it is sad. There was a sentence regarding Washington?s Farewell Address that seems to snidely refute his warning against entangling alliances (for a neo-conservative this would be anathema as it would negate so much of recent history as being wrong). He also said how Sam Adams Constitution justified the Massachusetts ruling on Gay Marriage, which was totally foolish. On page 219 he answers this question where Adams speaks out against effeminacy. One has to ask why even bring that up?

In any case this is basically a good biography. It can be a hard read due to so many extensive quotes.