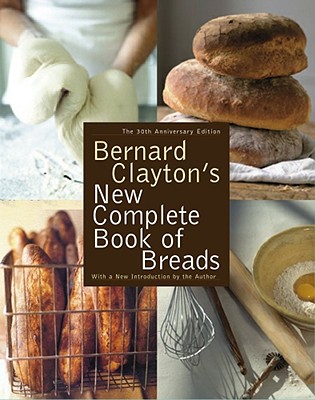 All Editions of Bernard Clayton's New Complete Book of Breads

Complete Book of Soups and Stews

The Complete Book of Pastry, Sweet and Savory

Nancy Silverton's Breads from the La Brea Bakery: Recipes for the Connoisseur: A Cookbook

by James A Beard

This is one of the Great books of baking in the Home. We bought the first edition which we have just about worn out baking from it. It is a Masterwork on Baking This is the second edition which is updated from the first addition which (1) was hung up on using Powder Milk in most of the recipes where milk was call far. Powdered Milk may have once been cheap and a welfare food but today it is expensive and not all that friendly to food stamp budgets. (2) called for ingredients that were not readily available in local grocery stores and in some geographically still not available but thanks to the internet, that was just coming into being with the first edition ---just about anything you want both legal and illegal is available there to purchase--such as Paw-Paws (a fruit of the native paw paw tree), and Monstera fruit, cherimoya, Peruvian Quinoa, et al and such rare ktichen equipment as a Duck Press. (3) updated baking equipment use. We do wish to warn you --that you intend to do most things by machine--you need to have a very mixer with more torque than the average puny mixer---otherwise you will burn out the motor--and this is particularly true if you are doing pure Rye Bread,
The one fault of this book as is will nearly all baking books is that it does not tell you everything you need to know. Sometimes ignorance is bliss (you do not have to have a Phd to make and bake bread) but when you grow depressed after trying to make breads that you can build a house and using expensive thousand dollars of ingredients trying to- --its time to hit the books, maybe school and learn as much as you can about yeasts--the little plant/creatures that create many good things and bad things in this world--such as wine. Wine makers could not make wines without these creatures and you cannot make bread or some cheeses without them..
Thanks to King Alfred Flour Catalog/magazine (this is not an ad for them) you can learn these things to do such as adding gluten to your loaf--especially if Bread Flour is not available in your grocery store. Also adding a crushing a 500-1000 mg vitamin C tablet to your recipe. It also does not tell you about the types of yeast species needed to make certain types of Bread. IF you are going to make San Francisco Sour Dough style bread---you absolutely have to have Lactobacillis sanfranciscensis, Candida milleri, and which is the type of yeast found in the original dough by micro-biologists in San Francisco sour dough as well as in European sour doughs. This requires that you also use maltose as a sugar. Maltose is found in Walmart's brand of Splenda but can be ordered in pure form via the inet. This species of Yeast requires low temps to work unlike modern high temp (115 f) yeast like Saf brand Yeast.
The book recommends that you can collect your own wild yeasts from the air---that is true but what you collect may make horrible tasting bread or no bread at all. It does not mention that microbiologists think that Sour dough resulted not from the air but from the Bakers hands

You Name It; It's In This Book

I've been baking bread for more than 40 years, and I have several bread cook books. This book, however, is the best I've seen to date. Someone gave me the recipe for Old Milwaukee Rye at least 30 years ago, and I've been making it ever since. Recently, I noticed that it came from this book, so I ordered it, and I was sorry I hadn't done so much earlier. This book has several variations of almost any kind of bread imaginable, as well as helpful sections on storing and freezing and problems and solutions. It even has a section on baking for dogs. This book makes all other bread books unnecessary.

I bake a lot of bread and this book is a great addition to my cookbook library. Nicely laid out and very thorough.

Bernard Clayton, in addition to being a master baker, is a master teacher. His instructions are clear and precise. His recipes present the world of bread at your finger tips. If you wish to become an excellent bread baker, you could ask for no finer guide.