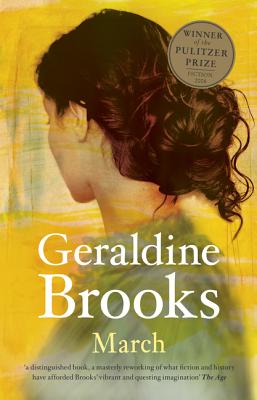 Winner of the 2006 Pulitzer Prize For Fiction. From the author of the acclaimed YEAR OF WONDERS, an historical novel and love story set during a time of catastrophe, on the front lines of the American Civil War. Acclaimed author Geraldine Brooks gives us the story of the absent father from Louisa May Alcott's LITTLE WOMEN - and conjures a world of brutality, stubborn courage and transcendent love. An idealistic abolitionist, March has gone as chaplain to serve the Union cause. But the war tests his faith not only in the ... Read More

Winner of the 2006 Pulitzer Prize For Fiction. From the author of the acclaimed YEAR OF WONDERS, an historical novel and love story set during a time of catastrophe, on the front lines of the American Civil War. Acclaimed author Geraldine Brooks gives us the story of the absent father from Louisa May Alcott's LITTLE WOMEN - and conjures a world of brutality, stubborn courage and transcendent love. An idealistic abolitionist, March has gone as chaplain to serve the Union cause. But the war tests his faith not only in the Union - which is also capable of barbarism and racism - but in himself. As he recovers from a near-fatal illness, March must reassemble and reconnect with his family, who have no idea of what he has endured. A love story set in a time of catastrophe, March explores the passions between a man and a woman, the tenderness of parent and child, and the life-changing power of an ardently held belief. 'A moving and inspirational tour de force' - Los Angeles Times Book Review 'Compelling...MARCH takes you on a fulfilling and engaging journey' - Sunday Telegraph Read Less

All Editions of March

Idealism And The Civil War

With its mixture of the heroic and the cowardly, the idealistic and the base, Geraldine Brooks fine novel "March" reminded me of why the Civil War continues, and rightly so, to fascinate many Americans. The novel presents a picture of the ravages and effects of the War upon our country and upon a small family in Concord, Massachusetts. The novel is nominally a sort of follow-up to "Little Women" by Louisa May Alcott, with a Bronson Alcott-like character as the hero. But this framing of the story is, for the most part, of little relevance to the theme and power of the book.

At the outset of the Civil War, March the primary character of the story, is a 39-year old minister of highly unorthodox religious views. He is also an idealist and an abolitionist who has lost his wealth in support of John Brown and who is a friend of Emerson and Thoreau. The other two primary characters in the story are Marmee, March's strong-willed and proto-modernist wife, and Grace, a former slave. At the age of 18, March had met Grace when he journeyed though the South as a peddler. The two are attracted to each other, and March sees Grace receive a terrible whipping as a result of her efforts in assisting March teach other slaves on the plantation -- Grace is literate -- to read and write.

The book turns on March's war experiences during the first year of the struggle with flashbacks to his early life, including his early encounter with Grace and with Southern plantation life, his unusual courtship of Marmee, his loss of his fortune in support of John Brown and his friendship with Emerson and Thoreau. The descriptions of the intellectual milieu of early Concord, particularly of Thoreau, are among the best parts of the book. Quotations from Thoreau's "Walden" are quietly weaved into the text of "Marsh".

Even though he is 39 years old, Marsh's idealism and commitment to the end of slavery make him rush to enlist and leave his family when the Civil War breaks out. During his period in the service, Marsh sees much that is evil in the conduct of the war and he witnesses slaughter in the small but terrible early battle of Ball's Bluff. He is soon transferred to teach newly-freed slaves at a plantation along the Mississippi River called Oak Landing which has been leased by a young Northerner named Canning. He learns for himself the great difficulties that will be involved in teaching the freed people. Following an encounter with Confederate irregulars, March becomes gravely ill, and Marmee is called to the fetid hospital in Washington, D.C. to which he has been brought for cure. Grace has become a Union nurse and is helping in Marsh's recovery. Ultimately, Marsh returns home to Concord to face his wife and four daughters in what will be an uncertain future.

The book shows eloquently how Marsh's idealism is tested by his experience of combat and by the immensity of the Civil War. Indeed, it shows Marsh's awakening to the ambiguities of the conflict and its causes. The novel also shows well the strain the War put on familial relationships, particularly as they involve Marsh's relationship with Marmee and with Grace. The book also focuses on Marsh and his high expectations of himself, and how he responds when his actions during the conflict often do not comport with his high ideals. A great deal of the complex character of our Civil War -- and the difficulty we have even today in understanding it -- comes through well in this book.

In his prose work "Specimen Days", Walt Whitman observed that "the real Civil War will never get into the books." In spite of Whitman's warning, many Americans continue to try to understand the significance of the conflict in works of history and literature. Brooks's novel, with its portrayal of the conflict and its participants, both of the North and the South, seems to me a good start, in a work of fiction, for the reader to approach and think about the Civil War. The book is thoughtful, both as far as the broad issues of the War are concerned, and in considering the effect of the War upon a freed young woman and upon a fictional idealistic young minister from Concord and his family.

I enjoy this book and recommend it to others. The book was interesting and well written. I love the Author.

I was pleasantly surprised by "March," by Geraldine Brooks. Not that I expected a Pulitzer prize winner to be a lousy read, by any means, but I think I was expecting something a little more heavy-handed. Instead I got a character study of a deeply naive Union chaplain whose eyes are opened to the horrors of war and to the entrenched racism of his country which extended even throughout the North. It also was a treat to see the beloved characters of "Little Women" painted once more, this time from a father's perspective. Marmee also gets a new examination, as an abolitionist who still struggles with her own prejudices despite her good intentions.
Highly recommended.

You don't know when a book will become a classic when it is written. What makes it a classic? Read March and you will understand how a book becomes one. This one will stay on my bookshelf. It is a book I will give as a gift to dear friends. It should be a must read for high school book lists.
Brooks story writing has depth and beauty the likes of which comes naturally to few writers.

March is written from the point of view of the father who went to war in Louisa May Allcott's Little Women.Mr March is an army chaplain during the U.S civil war, writing letters to his wife and daughters at home and showing us a much less saccharine side of the war and the March family than was portrayed in Alcotts' novel.