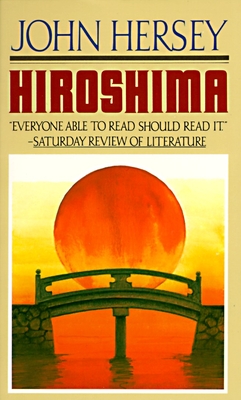 Almost four decades after the original publication of this celebrated book, John Hersey went back to Hiroshima in search of the people whose stories he had told. His account of what he discovered about them is now the eloquent and moving final chapter of Hiroshima. Read More

Almost four decades after the original publication of this celebrated book, John Hersey went back to Hiroshima in search of the people whose stories he had told. His account of what he discovered about them is now the eloquent and moving final chapter of Hiroshima. Read Less

All Editions of Hiroshima

A Bell for Adano

Too Far to Walk

Flags of Our Fathers

All Quiet on the Western Front

Hiroshima, Japan; 8:00AM. The all-clear sounds for the earlier air raid siren, and the city's citizens go back to their shopping, their reading . . . their every day tasks at hand. It's a windless day, but the sun is beginning to show signs that the day will be a hot one; for those out and about, it's already uncomfortably warm. Throughout the previous weeks, Hiroshima has had numerous false alarm air raid sirens, fraying the nerves of the Japanese inhabitants. Hiroshima has been lucky, being one of the two least bombed cities by the Americans in Japan.

8:16 AM. A flash of light: un-counted tens of thousands are instantly wiped from the face of the Earth. By 8:20 one hundred thousand people are dead, with tens of thousands more to follow in the months following. The world will never be the same, and the stark reality of the bomb has done its job.

Hiroshima was published in 1946, less than a year after the bomb had been dropped. It merited the space of a full issue in the New Yorker magazine, painting the first human picture of the tragedy through the following of six ordinary citizen's lives on that day.

Those six, all very different people, were the lucky ones - and their story is true. Following their lives on that day through this book both shocked and saddened me. This is important reporting at it's finest - a piece of work that resonates as strongly today as it did in it's original time, forcing one to consider the significance of atomic warfare from 1945 to the present and into the future.

Four out of five stars for an excellent essay on an important topic. Everybody should read this work once in their lives - especially those of the younger generation who have heard of the bomb but have never considered the reality and human suffering that goes with it. This one will stay with me for the rest of my life.