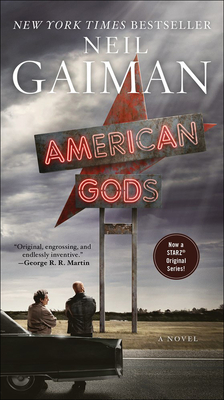 For use in schools and libraries only. Just released from prison, Shadow encounters Mr. Wednesday, an enigmatic stranger who seems to know a lot about him, and when Mr. Wednesday offers him a job as his bodyguard, Shadow accepts and is plunged into a dark and perilous world. Read More

For use in schools and libraries only. Just released from prison, Shadow encounters Mr. Wednesday, an enigmatic stranger who seems to know a lot about him, and when Mr. Wednesday offers him a job as his bodyguard, Shadow accepts and is plunged into a dark and perilous world. Read Less

All Editions of American Gods

The Ocean at the End of the Lane

This book is unique. Its central idea about how the old gods got to the US was great.I started this book with no expectations except the great comics Gaiman has written. It is on my top ten list.

Shadow believes, I think I do too.

Shadow didn?t want anything but to go home to his wife. After spending time in prison, finding out his wife was killed in a car accident days before he came home to her left him open to new ideas. Taking a job with a man named Wednesday, a man that he met on the plain, he set off for a new adventure that most would have found unbelievable. Seeing Laura (his dead wife) in the flesh, not just a ghost or a dream was one thing, but meeting Gods, and traveling across America to try and form a strong front was something Shadow took in without much thought. He was able to believe.

Truly a strange book, the only reason I read this is because I was told ?If you like weird, you will like this?, so I thought I would give it a try. Hard to explain or give a synopsis, very intricate story line. Lots of characters, many of them Gods from many different countries with hard to pronounce and hard to remember names. Some characters had simple names, Mr. World (but he had more than one name), most Gods have more than one name. There was back stories of how and why the Gods were brought to America which did help, never thought I would learn so much about ancient Gods and mythology from a novel (found myself googling Czernobog, Odin, the Zorya sisters and more). There is also time spent in the Gods world, the ?backstage? that sometimes came across as a dream state. Almost everything was tied up neatly by the end, Neil Gaiman wrote a very imaginative and creative book, I very much enjoyed the ?weird? of this one.

How I feel in love with Neil Gaimon as an author!

This book started it all for me. My love affair with Neil Gaimon's writings. After reading this book I read everything else he every wrote and was not disappointed. I have enjoyed everything by him but this was the first.

This book takes us on a journey of mysticism and reality and the complex but finite line that is between the two and how they often cross over and mix and mingle. The gods walking among us, what a fascinating concept!

Neil Gaiman?s understanding of religious concepts and ability to translate them into a contemporary writing style has no parallel. In an age where the ideal of God is narrowing to a fundamentalist notion, Gaiman reminds the reader of the plurality and diversity religion has given to humanity while at the same time offering a scathing criticism of its negative effects. A witty, engrossing and highly rewarding read, this novel stimulates as well as entertains. References to global religions, myths and cultures abound in this modern day commentary on American culture and society.

loved this book. gaiman always takes a twist on the reality that we know and American Gods is no different. as the main character encounters each of the mythological gods through his travels we get a look into the myths and stories we know, but with a fresh twist. great writing and awesome story!