by Farley Mowat (Preface by)

A gripping narrative of a conservationist's life among the wolves in the middle of the artic prairie. Read More

A gripping narrative of a conservationist's life among the wolves in the middle of the artic prairie. Read Less

All Editions of Never Cry Wolf

Owls in the Family

The Dog Who Wouldn't Be

The Boat Who Wouldn't Float

Lost in the Barrens 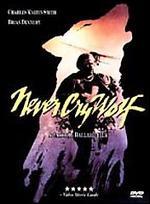 The Way of the Wolf

Of Wolves and Men

People of the Deer

The worn out paper back copy that I had read twice and shared needed replacing, so I ordered a copy in hardcover. A definite keeper

Enjoyed it very much. Fascinating knowledge to be learned about Wolves and their environment.

a wolf by any other color

I was deeply affected by this book. I read it at a time when I was starting to look at animals as more than zoo entertainment. I had just finished a book by Barry Lopez; of Men and Wolves. The books together give a powerful reminder of how much people have lost and will continue to lose as long as they see so much of the world around them as either playground or worksite. What doesn't fit on a playground or a worksite has no reason to exist. Mowat and Lopez have spent time with wolves and been able to see them in the complicated light they deserve. Maybe if The truth is known at one time in history Wolves made a place for people in the world and now, thousands of years later, it is time to return the favor.

Didn't want this book to end!

I absolutely loved this book. My first surprise was the sense of humor behind Mowat. This is the first book of his that I have read and it won't be the last. (I didn't see this movie). I laughed out loud at many of his quirky mannerisms and never expected to see a man of science so entertaining. His details of his experience are unbelievable bringing the reader right into the midst of his observations. He is able to deliver his message of compassion to these misunderstood animals to a wider audience. Although I don't recommend cohabitation with any wild animals, I don't believe it necessary to seek out to hurt any either. Highly recommend.

Will the Real Villain Please Stand

This is a tale that hasn't gone out of style. The wolf has gotten a bum rap and the author makes that more than clear. Buy it, read it, and enjoy a rollicking good story -- that's true!