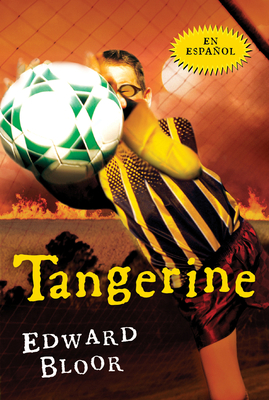 An enduring favorite is now available in a Spanish language edition. A season with the toughest soccer team in the county gives 12-year-old Paul the confidence to stand up to his wicked brother. Read More

An enduring favorite is now available in a Spanish language edition. A season with the toughest soccer team in the county gives 12-year-old Paul the confidence to stand up to his wicked brother. Read Less

All Editions of Tangerine

Paul is a tough, smart protagonist who doesn't let circumstance hold him back. When he takes a stand, he sticks with it through all the trials it may bring. He sees his mistakes and mis-steps to their conclusion, though he's scared or uncertain of the eventual outcome.

Bloor uses vivid imagery and strong character development to create a relatable emotional landscape. I really like the way he uses Paul's poor eyesight as a metaphor for various types of blindness (parental inattention, racial prejudice, social expectations). Very well-written. I enjoyed it.

Sports bullies get their just comeupance

This book combines both the good and bad aspects of school sports, giving readers a more realistic story than in many sports books. There is detailed soccer action, some football action, and more than one type of school bully. Repressed memory is an interesting factor, also, as young Paul struggles to remember incidents from his childhood and about his mean, two-faced brother Erik. Should appeal to girls as well as boys, as it has girls as standout soccer players. Some secondary characters are Hispanic, but not stereotyped.
Seventh-grader Paul is a good soccer goalie, despite a visual impairment, but his parents hardly notice his games. They are focused on his older brother's (Erik) promising football career as a place kicker. When the family moves to Tangerine, Florida, from Houston to give Erik a better chance to be recruited by a major college, Paul joins the middle school soccer team briefly. Technicalities (he is on an IEP for his visual handicap) lead the coach to exclude Paul from the team. After heavy rains damage much of his school, Paul switches to another, poorer school, where he again joins the soccer team and learns to like the rough "gangsta"-type kids on the team.
Paul even visits the tangerine grove of the family of some of his new classmates and becomes aware of many social/economic barriers in his new community. Meanwhile his mother focuses on enforcing neighborhood rules and his dad on Eric's success. Plot twists are realistic and keep you turning the pages. In the end, Paul learns personal courage and enjoys earning a "bad" rep for defending his new friends.

I remember when I first got this book back in the fifth grade (I am in college now). I got it from one of those Scholastic book order forms everyone got in grade school. I bought it without thinking. The order finally shipped to our school and I received my books. This wasn't the first one I grabbed. I believe it took me about a year to get around to this one. But let me say, when I finally did, I was blown away. Even at that young of an age, I knew this book was great. Paul, the main character of the book, is practically blind. He wears bottle-cap glasses. He and his family move to a new town, and the kids at his new school tease him, and call him an alien. The things that ensue in this book both shock and amaze you. I remember clearly an incident involving a house covered in a termite tent, but I can't say much more. It's one of those books that you read when you are younger and take with you.