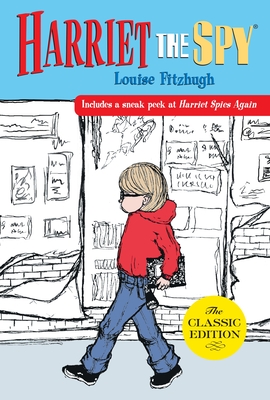 Harriet, would-be writer and avid observer of life, records everything she sees and hears. But what is she to do after her treasured notebook falls into the wrong hands? Read More

Harriet, would-be writer and avid observer of life, records everything she sees and hears. But what is she to do after her treasured notebook falls into the wrong hands? Read Less

All Editions of Harriet the Spy

Charlie and the Chocolate Factory

by E B White

From the Mixed-Up Files of Mrs. Basil E. Frankweiler

Set among the privileged wealth of New York?s private schools and private nannies, Harriet the Spy presents one of the most remarkable characters in children?s literature made even more remarkable by the context in which the book was first published.

The book opens with Harriet M. Welsch teaching her friend Sport how to play ?Town?. Harriet doesn?t actually have a middle name. She added the ?M? herself because it sounds more grown up. ?Town? is a game where you make up all the places in a town and then decide all the people who live there and what they do and who they know and what they think. From the start you know that Harriet has tried to teach this game to Sport before. You know that Sport puts up with Harriet because he likes her, not because she is good at teaching him games.

Harriet is free to invent herself any way she fancies. Harriet fancies being a spy. Harriet thinks this is the first step to becoming a serious writer. Virtually ignored by her busy parents, it is left to nanny Ole Golly to provide Harriet?s moral centre. Ole Golly is Harriet?s sole link to the world of adults and she is a wonderful character full of warmth and love with little patience for Harriet?s self-absorption. One evening Harriet goes to kiss Ole Golly goodnight and finds her reading Dostoevsky. Ole Golly reads Harriet an extract and tries to explain what it means.

Harriet goes to bed with her flashlight and reads under the covers until Ole Golly takes the flashlight away as she does every night.

?Sometimes Sport looks as though he?s been up all night. He has funny little dry things around his eyes. I worry about him.?

Janie Gibbs is Harriet?s best friend besides Sport. She is bookish, plain and freckled. Harriet writes:

?Janie gets stranger every year. I think she MIGHT blow up the world.?

There are many triumphs and disasters in the life of a spoiled little girl. Ole Golly gets engaged and moves away leaving Harriet to fend for herself for the first time in her life.

And then the biggest catastrophe of all occurs. Harriet loses one of her notebooks and it is found by her friends.

??Read it aloud, Sport,? said Janie harshly.
?I can?t.? Sport hid his face.
The book was passed back to Janie. Janie read the passage in a solemn voice.
?Sometime I can?t stand Sport. With his worrying all the time and fussing over his father, sometimes he?s like a little old woman.?
Sport turned his back on Harriet but even from his back, Harriet could see that he was crying.?

I won?t ruin any more of the story, but be assured that the resolution is realistic, the lessons learned are hard ones and, above all, the children behave like children.

Harriet the Spy had an enormous impact on me as a child. I thought she was a terrific truth-teller and that everything bad that happened to her was terribly unfair. With parental hindsight I can see Harriet for the arrogant and obnoxious creature that she is. And yet I love her just as much now as I did then. Undoubtedly the literary descendant of Emma Woodhouse and probably a not too distant cousin of Hermione Granger, Harriet M. Welsch stands for every little girl trying to stamp her mark on a world that tends not to take little girls too seriously. Harriet believes she knows better than everyone else and although she comes to understand that this is not the case, her irrepressible and empowering self-confidence is what shines through above her childish mistakes.

Even 25 years ago when I first read this book, I didn?t notice anything unusual about a girl dressed in a hooded sweatshirt and jeans. But when you put the book in its original context, published in 1964, you realize that Louise Fitzhugh was painting a rather unorthodox portrait of childhood. There weren?t many children?s books about female tomboys back then. Neither were there many portraits of boys who washed up and looked after their parents like Sport, nor were there many stories about brainy girls with dreams of becoming scientists like Janie. Clearly, Fitzhugh had something to say about gender stereotyping.

Born in Tennessee in 1928 Louise Fitzhugh was the product of a short-lived and unhappy union. Her father, Millsaps Fitzhugh, was bullied into divorcing her mother when Louise was only a few months old. The Fitzhugh family?s ?old money? status meant that Millsaps was granted full custody of the infant in a sensational legal battle that was reported in the local papers. Louise Fitzhugh grew up thinking that she had no mother and the rest of her life would be strongly influenced by this textbook Gothic South upbringing.

In 1949 Fitzhugh?s grandmother died leaving her the first part of the family inheritance. By this stage Louise Fitzhugh had made it to New York and a Creative Writing course having weathered a quickie teenage wedding that was annulled before it was ever consummated. Fitzhugh used the money to reinvent herself as an artist regularly taking lovers of both sexes and throwing herself into the Bohemian lifestyle that exemplified New York in the fifties.

In 1963 aged 35, Louise Fitzhugh began writing Harriet the Spy. Giving voice to the ignored little girl that she had been, Fitzhugh touched hearts all over America and the book was an instant success. Coinciding with the death of her father Fitzhugh used her creative and financial independence to abandon femininity all together. Fitzhugh swore she would ?never wear women?s clothes again.?

Harriet the Spy was immediately followed by a sequel The Long Secret and in 1974 Fitzhugh was working on her next novel, Nobody?s Family is Going to Change. The book portrayed an African-American family where the daughter wants to be a lawyer and the son wants to be a dancer. Tragically, Louise Fitzhugh suffered a massive brain aneurism in the month before publication and died. She was 46.

I have included the biographical information about Louise Fitzhugh because I think it?s interesting especially to those who have read and loved the book as I have. I realize though that there are some people who have never read the book and may even be put off from buying it for their children because of the facts of Miss Fitzhugh?s life. I hope this is not the case because I heartily recommend the book to anyone with a precocious preteen with a passion for reading.

Harriet the Spy has become a modern children's classic for good reason. The protagonist shares many traits with her readers, but also has her own unique flair. This combination of the familiar and the unusual is also used to maximum effect in the plot where a lonely girl devises spying games for excitement and learns the power of the pen when her school mates read what Harriet has been writing about them. If you are buying a gift for an advanced elementary school reader, this book is a winning choice.