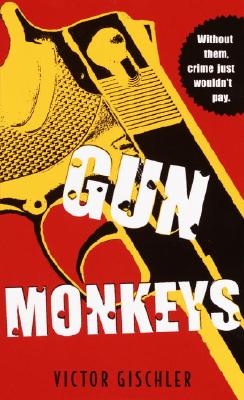 Nominated for the Edgar Award for Best First Novel, "Gun Monkeys" is a high-adrenaline, high-voltage tale of a quest for vengeance down the back roads of central Florida. Read More

Nominated for the Edgar Award for Best First Novel, "Gun Monkeys" is a high-adrenaline, high-voltage tale of a quest for vengeance down the back roads of central Florida. Read Less

All Editions of Gun Monkeys

Go-Go Girls of the Apocalypse

This first novel by Victor Gischler is so over the top as an action story, its lead character so tough yet so tender inside, the book seems to almost shudder in the hand. His lead character Charlie Swift is a National Geographic-loving, ruthless killer, whose girlfriend is a taxidermist.

This is the kind of pulp novel that, back in the day, great Noir films were made from- the prose is incisive and punchy and the imagery is crafted from a world filled with hard drinkers, gangsters, womanizers, gamblers, professional killers, and the way they view reality.

Author Victor Gischler keeps the description short and to the point and keeps the action going to keeps the reader turning pages, the perfect kind of pattern that the best action films are made from. The gangster quality of the characters seems a little too influenced by the TV show The Sopranos with its celebration of sadism as standard business and personal practice. I?m sure Gischler has had option offers for this book - it should make a popular, funny film- I would look to cast Adrian Brody if I were a movie mogul setting up a film deal.

Great lines: It is very difficult to repel a home invasion with your s****** hanging out. The 271-page novel has more than few clever turns of phrases that will keep you chuckling.

By the time protagonist Charlie Swift gets to even the score and regroup after his boss leaves the scene, there are wise guys sent to take him out in a clean up take over. He manages to shoot FBI Agents and Polar Bears (you?ll have to read the book?!), has been shot himself in his hand and ear and faces a show down with a trained killer while loaded with painkiller and standing barefoot in the snow.

Gun Monkeys was nominated for the Edgar Award for Best First Novel and it?s easy to understand why. Gischler creates some of the snappiest gangster dialogue, so aware of itself, so precisely wrought that it jumps off the page and smacks you in the face.

Originally published by Uglytown in 2001, and published by Dell in 2003, Gun Monkeys has the nature of a dramatic show like HBO?s The Sopranos, and the characters kill seemingly without reason, only operating under the orders of some superior criminal boss intent on protecting his territory.

What sets Gun Monkeys apart from other tales is the style of the prose which essentially allows us to see the lead character Charlie Swift and all the action through a colored glass, affecting us viscerally while simultaneously distancing us from the proceedings, to allow us a laugh at the shenanigans. The author includes plenty of enticement for us - there is a large cache of money that he and an associate stumble onto and part of the ending of this tale includes some real wish-fulfillment.

I have a little test I perform on new books, a test I have developed since my days as an Undergraduate at Berkeley. I scan the first chapter, and if it grabs me, then I usually take the book out for a few cups of coffee in whatever bookstore/café I am shopping in. I have returned to this one for more than a few days and I?m sure folks have wondered why I laugh out loud while I?m sipping a cappuccino.

The first chapter was what grabbed me: ?I turned the Chrysler onto the Florida Turnpike with Rollo Kramer?s headless body in the trunk, and all the time I?m thinking I should?ve put some plastic down. I knew the heap was a rental, but I didn?t like leaving anything behind for the inevitable forensics safari. That meant I?d have to strip all the carpeting in the trunk, douche out the blood with Clorox, and hope Avis took a long time to notice. I should?ve just taken a second and put some plastic down.?

For those out there who uphold that old literary sense of poetic justice, you may be let down with this story. Although our hero Charlie has a substantial amount of fortitude, able to stalk and dispatch numerous bad guys, even after having numerous beatings and gun shots (his image as the author describes him reminds me of that old joke about the lost dog with mange, a broken tale and one ear chewed off that goes by the name ?Lucky?- he?s lucky he?s not dead), he never seems to meet his match.

Victor Gischler doesn?t waste a lot of time but sets up a strong visual scene and allows our protagonist hero anti-hero to continue on with his murderous quest, one which we feel is fully justified, given the personal information we are given about Charlie.