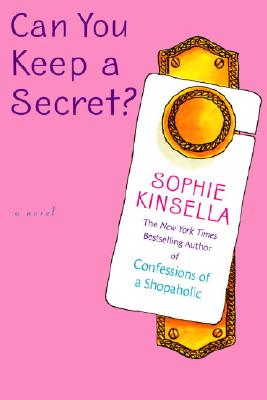 Can You Keep a Secret?

Already scooped up for a major motion picture by Paramount--produced by and starring Kate Hudson--this #1 UK bestseller is by the author of the popular "Shopaholic" trilogy and offers readers a brand-new heroine to love. Read More

Already scooped up for a major motion picture by Paramount--produced by and starring Kate Hudson--this #1 UK bestseller is by the author of the popular "Shopaholic" trilogy and offers readers a brand-new heroine to love. Read Less

All Editions of Can You Keep a Secret?

I've Got Your Number

My Not So Perfect Life

Love The One You're With

Eye catcher from page one. Couldn't put it down. Thoroughly entertaining.

Would You Tell All Your Secrets to a Complete Stra

As usual, Sophie Kinsella delights her fans with a lively story of a girl after our own hearts. Like Becky Bloomwood (Shopaholic), Emma Corrigan is a pure delight as she fumbles and frets her decisions, especially when on a plane flight where she experiences heavy turbulence ? Emma?s not a happy flyer ? she freaks and turns to the stranger sitting next to her and reveals all of her deepest secrets. She is so relieved when the plane finally lands safely and although a little embarrassed about her confessions, she?s figures he?s a stranger and she?ll never see him again, so what?s the harm, right? Well, next thing you know, once Emma?s back at work, she eventually discovers that her airplane seatmate is none other than Jack Harper, her company?s founder and he?s in town and (gulp!) he remembers her and everything she told him! That?s when the fun starts!

Emma tries to find ways to avoid Jack at work, but he always seems to find her and learns that a lot of the secrets that she shared with him are in fact, about some of her coworkers. Emma?s been in the running for a promotion for the longest and she tries hard to save face, but Kinsella keeps us in stitches as Emma is exposed again and again ? her secrets even find their way on TV!

I enjoyed this book, coincidentally, while on a flight and although I did experience a little turbulence, I didn?t reveal any of my secrets to the person sitting next to me ? then again, I was sitting next to my sister, and she already knows my secrets, or almost all of them!
The other characters in this story add weight and dimension to this funny tale. From her co-workers to her parents, to her roommates, Kinsella adds depth to the story and entertains readers with the details of the characters? charming idiosyncrasies that are so much like our own, yet she finds the right situations to pair them with and the combination is hilarious! This is chick lit at its best and a fast read that readers will love ? highly recommended!

Buy, beg, borrow or steal a copy of this book. It is lighthearted, romantic and roll in the floor hilarious. I found myself laughing out loud reading about Emma's adventures. I really identified with the plane scene because I am scared of flying too. In my opinion this book is better than her Shopaholic series. Not a book that you will easily forget.

A Great Book For Vacation

This was a great book to escape to after a long day at work. It will sweep you away in the main character's life which is refreshing and ever changing.

i would definitely recommend this book...very funny, touching, and an easy read.