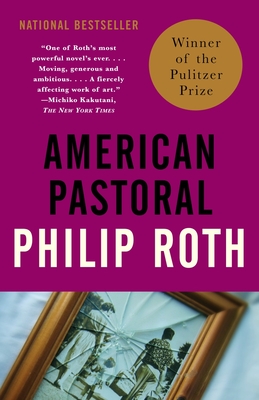 An ordinary man finds that his life has been made extraordinary by the catastrophic intrusion of history, when, in 1968, his adored daughter plants a bomb that kills a stranger, hurling her father out of the longed-for American pastoral and into the ingenious American berserk. "Never before has Roth written with clear conviction".--"Time". Read More

An ordinary man finds that his life has been made extraordinary by the catastrophic intrusion of history, when, in 1968, his adored daughter plants a bomb that kills a stranger, hurling her father out of the longed-for American pastoral and into the ingenious American berserk. "Never before has Roth written with clear conviction".--"Time". Read Less

Philip Roth's Pulitzer-Prize winning novel "American Pastoral" (1997) tells the story of Seymour "Swede" Levov and his life of tragedy beneath every outward sign of success. I thought it might be painful to read this book, with its twin focus on the decade of the 1960s and the War in Vietnam and on the much-visited preoccupation, novelistic and otherwise, with the nature of Jewish identity. Both subjects can still be raw for me. Roth handles them in this novel with thought, reflection, and a substantial degree of compassion. Although I have had mixed feelings regarding other books of Roth, "American Pastoral" held my interest and emotion. It is a masterful, nuanced work.

The book is set in Newark, the New Jersey suburbs, and in the relatively isolated, rural, western part of the state in a town called Old Rimrock. The story is written by Roth's frequently-used "Zuckerman" personna. Zuckerman has a large role in the first third of the book as the readers sees his relationship to Swede and to Swede's irascible younger brother who has become a much-divorced successful cardiac surgeon in Florida. Zuckerman recounts in the body of the book Swede's life, or what the reader is given to understand Zuckerman has learned of it. Zuckerman does not appear in his own person after the first section of the novel.

Swede Levov is the third generation of the family that has gradually built a flourishing business in the manufacture of gloves in Newark. As a high school student, Swede is an extraordinary athlete who letters in three sports, an anomaly in the New Jersey Jewish community of the 1930's "whose elders, largely undereducated and overburdened, venerated academic achievement above all else." (p. 3) An unabashed lover of the United States, Swede enlists in the marines only to have WW II come to an end before he sees any action, graduates from college, turns down a baseball contract, and succeeds his domineering father as the owner of the glove factory. An obedient son to his father, Swede acts with true independence on only one occasion of his life: his marriage to Dawn Dyer, a Catholic and a former Miss New Jersey and participant in the Miss America pageant. (While in the marines, Swede had, at his father's urging, terminated an earlier engagement to a non-Jewish woman.) Swede and Dawn move to Old Rimrock, a change from their earlier urban life, to life in a large old stone house while Dawn pursues her dream of independence in becoming a successful cattle farmer. The couple have a difficult daughter, Merry, who stutters and tends to go her own way.

With the trauma of the Vietnam years and the violence of American cities, including Newark, the adolescent Merry becomes violent and a radical. She bombs a store in Old Rimrock, killing an esteemed local physician. Then, she runs off and winds up in Oregon where she engages in more bombing and kills three people. When Swede finds his daughter after five years, she is thin, emaciated, living in filth and announces that she has become a Jain. The denouement of the book takes place during a long, tense, dinner party, described in detail, that Swede and Dawn host for Swede's parents and various family friends with whom they share relationships, sexual and otherwise.

For all the violence and the disruption of the 1960s, Roth offers a fondly nostalgic portrayal of American life. The Jewish community of New Jersey is shown is hardworking, family-oriented and patriotic, in contrast to some less complimentary portrayals in Roth's earlier books which emphasize difficulties with sex. They want what is best for their families and try to behave with dignity and probity. The glove and tanning industries are described in detail, emphasizing the hard-working character of the Levovs as well as their limitations. Of the people shown in the book, none have any attachment to the religious aspects of Judaism. Yet the community is close-knit with strong ethnic Jewish identification.

Swede Levov's own personal tragedies, focusing on the murders committed by his daughter, followed by the depression and unfaithfulness of Dawn, mirror the disintegration of American life during the 1960s. The book deplores the Vietnam War and the violence of the cities but there it offers the sense that America has lost its moorings by forgetting some of the earlier values that the Levovs, as well as Dawn Dyer's family, had held dear. Roth shows great sympathy with the work ethic even while he continues to develop themes of his earlier books on matters pertaining to sexuality and its repression. The book offers no answers for the way Merry behaves. Neither Dawn nor Swede are criticized for abandoning their religions or for their marriage, although this subject gets examined and discussed in detail. The book evidences a pessimism for the America of the 1960s with perhaps a hope of a recapture of some of the strengths of an earlier generation.

The book moves back and forth between Swede's life in the 1960s and his earlier life as athletic hero, clean-cut young man, and obedient son. Many of the other characters in the book, as it unfolds, are developed with a great deal of insight. Although it includes much of Roth's sardonic humor and satire, "American Pastoral" is a disturbing, serious novel which struggles valiantly and sympathetically with questions about the nature and modern continuation of the American dream.