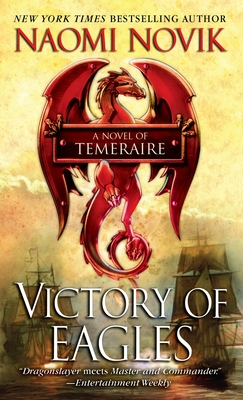 The bestselling series starring the fighting dragon Temeraire and his captain, Will Laurence, reaches a peak of excitement with this fifth installment from award-winning author Novik. Read More

The bestselling series starring the fighting dragon Temeraire and his captain, Will Laurence, reaches a peak of excitement with this fifth installment from award-winning author Novik. Read Less

All Editions of Victory of Eagles

The Horatio Hornblower of dragonkind

With a bow towards the dragons of Anne MacCaffrey, as well as respectful homage towards Patrick O'brian's more modern revival of the Hornbloweresque naval genre, Ms. Novik has produced a marvelous body of work that is deeply satisfying for history buffs, and delightful for fans of dragondom. Can't wait for the next installment!
As with Obrian's work, one marvels at the hardships endured by those who entered into such a 'hard service.' Fans will continue to hope and pray for success in Temeraire's efforts at social reform for dragons in the UK and elsewhere.

Wonderful and all sorts of Superlatives

I am still befuddled over how a first-time author managed to follow up a best-selling debut with four sequels that never dimmed in comparison to the first. In fact, "Victory of Eagles," the fifth book, is just as high in energy and creativity as the very first installment, even though the reader is by now quite accustomed to all of the characters and the world they inhabit.
Novik tries something new here, which is to alternate between the points of view of Laurence and Temeraire. It was great fun to be let into Temeraire's head, and Novik pulled this absurdly brilliant yet child-like view off nimbly. It is a great credit to Novik that I have never tired of Temeraire's obstinacy or naivety; he is so wonderfully characterized that all those quirks of personality make sense rather than grate.
I cannot give too in depth of a review without giving away some huge spoilers, so I'll just say that Napoleon has landed! The situation for Laurence and Temeraire, however, is even hairier than the mere occupation of their home by a tyrant.
I do appreciate as well that Novik doesn't pull her punches. She is willing to do almost anything to her protagonists for the sake of a plot that is dynamic and unpredictable.