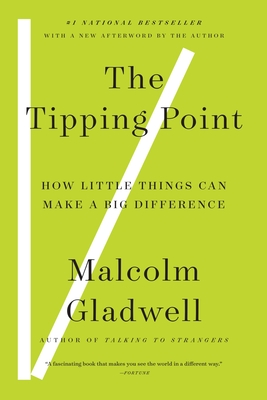 The Tipping Point: How Little Things Can Make a Big Difference

An introduction to the Tipping Point theory explains how minor changes in ideas and products can increase their popularity and how small adjustments in an individual's immediate environment can alter group behavior. Read More

An introduction to the Tipping Point theory explains how minor changes in ideas and products can increase their popularity and how small adjustments in an individual's immediate environment can alter group behavior. Read Less

All Editions of The Tipping Point: How Little Things Can Make a Big Difference

Outliers: The Story of Success

Talking to Strangers: What We Should Know about the People We Don't Know

Blink: The Power of Thinking Without Thinking

David and Goliath: Underdogs, Misfits, and the Art of Battling Giants

The World Is Flat: A Brief History of the Twenty-First Century

What the Dog Saw: And Other Adventures

Freakonomics: A Rogue Economist Explores the Hidden Side of Everything

Outliers: The Story of Success

I found this book very enjoyable. Mr Gladwell gave 3 main points in which relate to almost all epidemics. the first was ¨ The Law of the Few¨ which was in which a social group was created and people with specific talents would fit into that group and help solve the problem. The second point was called ¨ The Stickiness Factor¨ in which people were using memories to help relay a message. This was very big through television for children. The last point was called ¨ The power of context¨. He used an example in which there were four young boys trying to rob a middle aged man, and the man had a weapon and fired at them and rebelled. This showed that the environment had an affect the each situation that had a problem. He correlated in which areas that were popular with minor crimes only had minor crimes and the major crimes in that area were down. These were just some of the main points that I found interesting in the book. I would recommend this book to many of my friends that want a different perspective on the world.

This book is great for finding problems and how to solve them. Mr.Maxwell gives many real life examples that apply to everyone. This book has concepts that in which a situation is becoming difficult to control. My personal favorite is where is talks about smoking, which has affected my life personally. I greatly enjoyed this book and I hope you do also.

Very Interesting. Very observant. A really good read. But then I enjoy all of Gladwell's books.

The book itself was in perfect condition and arrived in a most timely manner. Very pleased.

Stuff You Never Thought Of

This book, along with Gladwell's "Blink" and "Outliers: The Story of Success" are outstanding reads and invoke memories of the first time I read Vance Packard's "The Hidden Persuaders" some forty years ago; the feeling that someone was sharing secrets that had always been kept from me about the world I live in. I'll read more of Malcolm Gladwell.