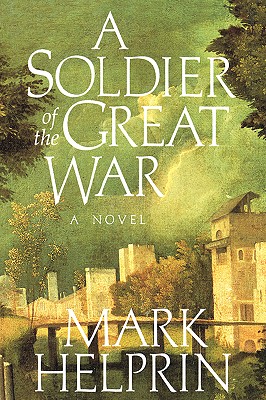 A Soldier of the Great War

An old man's magnificent tale of love and war-a recapitulation of a life and a reckoning with mortality told by one of America's most acclaimed novelists. Read More

An old man's magnificent tale of love and war-a recapitulation of a life and a reckoning with mortality told by one of America's most acclaimed novelists. Read Less

All Editions of A Soldier of the Great War

Paris in the Present Tense

In Sunlight and in Shadow

The Veil of Snows

A City in Winter: The Queen's Tale

The Pacific and Other Stories

This is the best fiction I've ever read. The author's words just flow with lots of descriptions which you can visualize. The story is about a man retelling his life as a soldier. There's lots of history in this novel. He was a soldier in the Italian army during WWI. He fought mainly against the Austrians. It's not all a war story but a life story of incredible happenings as well as a love story. It has many pages but it's also a page turner you will love.

Everyone Should Read This Book

Helprin's novel came out in the early 90s to much acclaim. It is an absolute classic story of one man's life, primarily during World War I. Another of his books that should be assigned reading in English and/or History courses.

This may well be the best novel written by an American writer in the 20th century - and, one could argue, even in earlier and later centuries. Helprin is brilliant. Period.

This is a wonderful book albeit you have to accept the early slow development. I had not realised the effect on Italian conscripts nor the dreadful conditions under which they were commanded in the Great War until reading this book, I think it quite a "Tour de Force" and would thoroughly recommend it.

Mark Helprin's A Soldier Of The Great War must be considered a modern literary classic. The description is artful, the action is intense and there is humour throughout. The underlying vein of irony is brilliant: Italy at war. The chaos, described by a young student of "aesthetics" searches for meaning and purpose. Only love and death can give such a story a proper conclusion. Bravo!

Simply stated, one of the best books I have ever read! It should be on everyone's "must read" list.