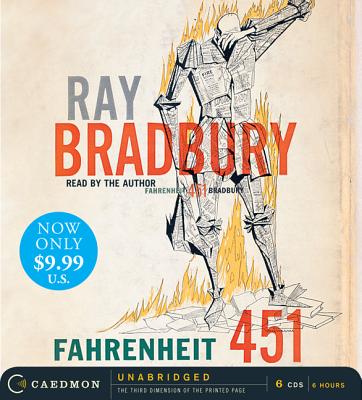 Fahrenheit 451 is Ray Bradbury's classic novel of censorship and defiance, as resonant today as it was when it was first published over 50 years ago. Guy Montag was a fireman whose job it was to start fires... The system was simple. Everyone understood it. Books were for burning...along with the houses in which they were hidden. Guy Montag enjoyed his job. He had been a fireman for ten years, and he had never questioned the pleasure of the midnight runs nor the joy of watching pages consumed by flames...never questioned ... Read More

Fahrenheit 451 is Ray Bradbury's classic novel of censorship and defiance, as resonant today as it was when it was first published over 50 years ago. Guy Montag was a fireman whose job it was to start fires... The system was simple. Everyone understood it. Books were for burning...along with the houses in which they were hidden. Guy Montag enjoyed his job. He had been a fireman for ten years, and he had never questioned the pleasure of the midnight runs nor the joy of watching pages consumed by flames...never questioned anything until he met a seventeen-year-old girl who told him of a past when people were not afraid. Then he met a professor who told him of a future in which people could think...and Guy Montag suddenly realized what he had to do! Read Less

All Editions of Fahrenheit 451

The Stories of Ray Bradbury

Thoughr I was ordering the book - not the study guide. Now, I will have both.

In English class, we read the book Fahrenheit 451, by Ray Bradbury. I thought this book was pretty good, but it wouldn't be that good for people without a big vocabulary. There are a lot of big words that most kids don't know, I'm in the 6th grade, and this book was a little confusing for me. It's pretty much about a dystopian future, when firemen burn books, and start fires, instead of putting them out. In this future, everyone encourages burning books, they think that it's a waste of time. If they catch you with a book, they will burn all of them, and burn your house, and possibly put you in a insane asylum. You are considered crazy if you like books. This is a story about a man, Montag, who discovers the truth about books, and that they aren't as terrible as he believed, and everyone says. The ?normal? people like to sit in front of the television all day, and watch shows with no storyline, and they hate to socialize. Montag, with the help of Clarisse and Faber, discovers the truth, and heads on his way to a camp of ?The Book People.? ?The Book People? are camps of Harvard degrees along the railroad track, who memorize books.

The book Fahrenheit 451 is a very thought provoking book. The author uses different tools such as symbolism and irony to express different themes. One theme is knowledge versus ignorance and how to not follow the status quo. The main character, Guy Montag , is on a journey to find the truth. He wishes not to become like the others in this society who are lazy, unmotivated and void of emotion.


Montag starts questioning his job as a fireman and goes after the truth. In this time period, Firemen burn books instead of putting out fires. So this change from being void of emotion, just following orders, to a person of knowledge is very hard for Montag. Events happen throughout the book that start to open his eyes to the truth that books can hold instead of believing what is fed to him by the government through television and radio.


One of the scenes I liked most from this book was when Montag's first revelation about the way the society works, happens at an old woman's house where he and the other firemen were sent to burn books . When the firemen arrive at this woman's house the woman is still there, when usually the police come and get the person first. So now the firemen had to burn a house with a woman inside it. But before they can, the woman pulls out a match and lets herself go up in flames with her books. So now Montag realizes what people would do for their books and that they might have some meaning to them.


This book is an awesome dystopian future novel by Ray Bradbury which makes you think about human behavior more deeply.

I think the book Fahrenheit 451 by Ray Bradbury was an interesting book about Guy Montag, an ex-fireman. In this future, firemen burn books because the government says they are illegal, but they really don't want anybody to think.
One of my favorite parts is when Montag is running away from Mechanical Hound and escapes by climbing in the river, pours whiskey on himself, changes clothes and floats away down the river. There, he runs into the wilderness and finds the Book People, a group of people who have memorized books.
An important part in the book is when Mrs. Blake, an elderly woman, commits suicide and burns with her books. This made an important impact on Montag because after her death he did not want to burn anymore books or possibly people. Another import character is Clarisse McClellan, a crazy seventeen year old who loves the wilderness, likes to study people, and asks many questions.
Overall I thought this book was well written and very futuristic. The book had many emotional parts. It had its ups and downs and some parts were very grotesque; Captain Beatty burns and boils. I would recommend to anyone who is reading this to read Fahrenheit 451!