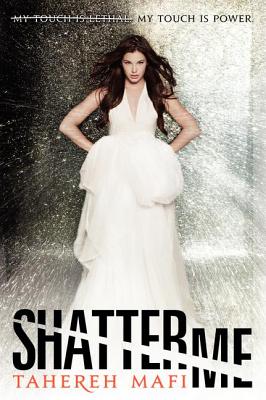 Set in a dystopian world, Shatter Me is the story of a 17-year-old girl imprisoned for possessing a fatal touch. As she watches everything crumble around her, she must choose between relinquishing her power or using it to save the world. Juliette hasn't touched anyone in exactly 264 days and the last time was an accident. Now accidental murder has her locked up in an asylum where happy is a hot meal and not being dead in the morning. No one knows why touching her skin for too long is fatal. No one knows how to fix her ... Read More

Set in a dystopian world, Shatter Me is the story of a 17-year-old girl imprisoned for possessing a fatal touch. As she watches everything crumble around her, she must choose between relinquishing her power or using it to save the world. Juliette hasn't touched anyone in exactly 264 days and the last time was an accident. Now accidental murder has her locked up in an asylum where happy is a hot meal and not being dead in the morning. No one knows why touching her skin for too long is fatal. No one knows how to fix her problem. No one really cares. The world is too busy crumbling to pieces to pay attention to a 17-year-old girl. Diseases are destroying the population. The ozone layer is deteriorating. Farms are scarce, food is hard to find, temperatures are unreliable and the clouds are the wrong colour. The Reestablishment said their way was the only way to fix things. They said the people were to blame for wasting and raping the land of its resources. It's time to start fresh, is what they said. Bleach the past and throw away the freaks. So they threw Juliette in a cell and chopped up the opposition while she blinked. Now enough of the population is dead that the rest are whispering war and The Reestablishment has changed its mind. Maybe Juliette is more than a tortured soul stuffed into a poisonous body. Maybe she might be useful. Maybe a Venus flytrap is exactly what they need right now. And maybe Juliette doesn't give a damn what The Reestablishment needs. Maybe she's tired of being a monster. Maybe she wants to be a human being for once in her life. Maybe she wants to fight back. But Juliette has to fight much more than a war. She has to fight herself for the right to be human and fight the world for the right to be free. She has to make a choice. Be a weapon. Or be a warrior. Read Less

All Editions of Shatter Me

The Unbecoming of Mara Dyer

This book made me question a lot of things - firstly, about why it is so hyped, and secondly, what are others seeing that I am missing out? I genuinely had to ask some of my friends what they thought of the book, because I saw so many high-rated reviews for it (not from my friends but others I follow on GR) and I mostly got 'eh I didn't like it much either' kind of answers. Maybe it was the time in which it released - the era of dystopias, but this is more like a romance set in a dystopic world than a true dystopia. Honestly, this book takes the love triangle to a cringe-worthy level, and WAIT I KNOW YOU MAY HAVE LOVED THIS BOOK BUT I GOTTA GET MY FEELINGS OUT IN A RANT before I can even continue with what I actually liked. Buckle your seat belts, darlings, because this one is going to be gif-fed up!

Firstly, I gotta ask - WHY? Why the focus on the romance in a dystopia? I am not one for sticking to genre conventions - heck, I love when books subvert them and introduce some new elements. But the 'new elements' in this weren't exactly new. There's the childhood friend who is now a hottie trope. Bad boy with (probably) a heart of gold trope (We'll come to that LATER OH BOY). No, what my main problem was with this book sticking its toe out of genre boundaries, is that it does it in the name of the most irritating love triangle. AND I LIKE LOVE TRIANGLES! WHAT HAVE YOU DONE TO ME?!

Also, how in this messed up world where people don't have proper living conditions, is the romance the main conflict of the story? It is not even a dystopia-that-looks-like-a-utopia kind of plot that love triangles are usually featured in! The world is dying, there is a fascist government ruling over them, and the first thought of these teens is whether they can get some. (It is not my imagination - there are literally scenes where the making out just happens, due to Circumstances That Just Need to Insert a Hot Makeout Scene) The world-building is sorely lacking in this book - there is barely an explanation given for how the Reestablishment came about, how it is all co-ordinated, how the resistance is not able to do any damage.

Adam is this hero complex guy who liked Juliette when she was younger because she acted soooo good, lay down while other kids were tormenting her and stuff. He, of course, defended her and beat up the other kids, but his double standards are such that he admired her for not fighting back?! The romance with him would have been more believable if there was some actual development, but considering it is all silence glances in the start and very little conversation on her part, I'm declaring this as insta-love and a case of I-need-human-touch-STAT. I get that Juliette didn't have anyone to touch for years, but that doesn't mean his touch will immediately comfort her in every circumstance. It is more like an excuse to have them kissing again and again.
Also his actions don't make much sense in the context of what he does have to lose from helping her - don't get me wrong, I liked that he didn't turn out to be shady or a backstabbing betrayer, but I also don't see why he would risk so much with barely a plan.

And the writing doesn't help matters, really. Sure, there is the fact that this is narrated as Juliet's thoughts, so we get a very close understanding of what she is going through, and some crossed out sections where we see her replacing what she wants to say with what she actually says. But why did there have to be so many METAPHORS?! I get that Juliet loved books a lot, but I have read like over 2000 books in my life, and I don't talk inside my head like everything is inexplicable without a weird metaphor attached to it. It gets too much at time, like body creaking like a staircase? Also, another weird quirk is sometimes numbers are used instead of the words for numbers, which kinda ruins the flow in a sentence. And this may be minor, but why the heck is Juliette gasping so much? This girl is made up of being surprised all the freaking time.

Adam lifts her up? Gasp! Castle agrees with her on something? Gasp! Warner being his usual terrible self? Gasp! Adam kisses her? You guessed it right - Gasp! (Actually the last one can be forgiven but I'm not in the mood)

And let's move on to the other part of the triangle -Warner - by the way, does it count as love triangle if one guy is just being plain obsessed with her even when she is like 'eww no dude get away from me'? He literally thinks she is like him, and they have a CONNECTION and she just HAS TO BE AT HIS SIDE as he rules over his corner of the world.

Dude, why are you so dense? He constantly invades her personal space and treats her like a possession than a human being capable with her own agency. How is he even a love interest? Also, this book had his short story attached, to which I am only going to say: nah, doesn't excuse what you did, you ass. He knows Juliette was psychologically tortured, and his idea to make her better is to psychologically torture her more? How is he even justifying torturing her considering what he himself went through?


Finally, let's get to the parts that I did like - I liked the getting into Juliette's head way of narrating this book. She is a character kept in the dark (literally and metaphorically) so she sort of reveals the terrible world as she goes through the book. She also shows resourcefulness, and a hint of grey morality when it comes to getting things done (still, stay away from her, Warner!). But what I really liked was in the second half, when we get to meet the X-Men other people like her. I mean, she is basically a stand-in for Rogue, and there's this secret underground bunker where other mutantspowered people live, so I was excited about that, and what that would mean for this story. But it does arrive like pretty later in the story, so my enjoyment of that was already affected by my irritation with the love triangle.

Overall, this is a book that I wanted to love, majorly because I love books about powered people but the focus and main storyline of the book had me disappointed in it.

WOW! I won this book in a giveaway, which I was extremely happy about, but I 't think I would've read this book if I hadn't won. I am so glad I had the chance to read it! Although I saw all the good reviews, I was really hesitant, but this book was beautifully written & had me hooked even from the first pages!

Juliette was a very interesting protagonist. She's been locked up/hasn't touched anyone for 264 days (she also likes to count things) because the last time that happened, she killed the one she touched. But then she gets a cellmate and things get exciting!
Her emotions and thoughts were intriguing, and I want to know what's going to happen next! Adam was awesome; she's so lucky! I'm definitely looking forward to a sequel and the actual release of this book in November!!