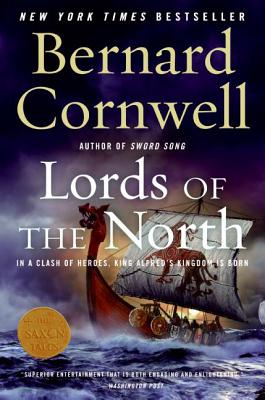 Lords of the North

Cornwells third and most dramatic volume in the Saxon Chronicles is the story of the creation of modern England, as the English and the Danes become one people by sharing language and fighting side by side. Read More

Cornwells third and most dramatic volume in the Saxon Chronicles is the story of the creation of modern England, as the English and the Danes become one people by sharing language and fighting side by side. Read Less

All Editions of The Lords of the North

Sword Song: The Battle for London

Bernard Cornwell's Saxon Chronicles are outstanding! I can't believe I haven't heard of him until recently. Don't start this series unless you are willing to enter into a love affair with 9th Century England...his books are an education unto themselves! While the main character is from his bountiful imagination, the rest squares with the little known from this period. Do yourself a favor and order ALL of them from Alibris at once; you won't have to wait by the mailbox. Great prompt service even books from the UK come as quick or quicker than US suppliers. Keep up the good work!

I've read a lot of Bernard Cornwell and always enjoy the way he mixes history, his characters, and the grungy feel of the period he's writting about. Lords of the North favorably compares with his other work and brings in a little known period of British History. I enjoyed it and went right through it. I'd thought it was the final book in a trilogy, but at the end he concludes in much the same way he used to end his Sharpe's series (Sharpe will march again) saying that Uhtred's sword would have more work to do or something like that. So I liked it and look forward to the next book. I recommend it to any Cornwell fans, but if you want to read this series you should start with The Last Kingdom.