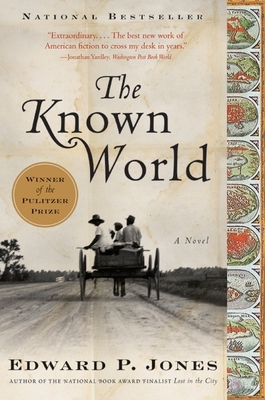 In one of the most acclaimed novels in recent memory, this two-time National Book Award finalist tells the story of a black farmer and former slave who falls under the tutelage of the most powerful man in Manchester County, Virginia. Read More

In one of the most acclaimed novels in recent memory, this two-time National Book Award finalist tells the story of a black farmer and former slave who falls under the tutelage of the most powerful man in Manchester County, Virginia. Read Less

All Editions of The Known World

The Amazing Adventures of Kavalier and Clay

Edward P. Jones' novel The Known World complicates the reader's knowledge of the "peculiar institution" of slavery by focusing in part upon the relationship between black slaveowners and their slaves, and reveals how contingent was the freedom even of freed slaves. The novel has an epic amplitude, sweep, and ambition, and is arguably more various in its characterization, particularly in its representation of black male characters, than Toni Morrison's celebrated Beloved, which depicted the interior lives of her three principal female characters, but also seemed to seek gender detente for the criticisms lodged against Alice Walker's The Color Purple by depicting her male characters like Paul D as moral angels (Ralph Ellison once commented that white American novelists depict African Americans in their books as clowns, beasts or angels). Jones' novel has echoes of Faulkner and Garcia Marquez--Faulkner's imagining of a world in Yoknapatawpha County, Gabo's magic realism--but his prose is plainer, less ornate, less fabulist than either. Read the novel for the moral complexity it brings to our understanding of slavery, but one warning: the multitude of characters is often confusing, and the author doesn't help matters by largely omitting distinguishing physical markers by which the reader might have identified them.

I was a little dismayed to have to read this book for a book group because the reviews when it first came out were off-putting. Yes, there were descriptions of the horrid abuse, physical, emotional, sexual, of slaves but the rest of the story carried the weight. I'm glad I decided to get started, and it was worth finishing.

There are a lot of similar characters as the other reviewer stated, and the story did jump from a given time frame to 50 years later or 10 years earlier. This is not a linear story but it is a well-written one. The writing flows and is so descriptive, I had to keep reading to see what else would happen. You start out caring or disliking some characters, and then find your opinions changing through the chapters.

Each chapter starts with several references and some of them seem to have no bearing on the main story. But Jones works his magic and it was satisfying to go back to the start of a chapter to see if I could recall what the references meant. This book is entertaining on many levels, and it requires some effort. If you are put off by that, and just want a straight story from A to B with 5 or so characters who all act rationally, then this is not a book for you.

The book centers around a fictional plantation where a black owner has slaves from his own race just before the Civil War. Yet the book doesn't really focus on this fact or its implications in a direct way. It becomes an expansive look at numerous characters in the county encompassing the plantation--black and white characters and their interactions. Unfortunately, the characters often enough behave in ways that are not consistent with their previous descriptions/actions and many of the characters sound similar enough to each other that it's difficult to sustain belief and care for the characters throughout the lengthy narrative. In addition, the author departs from the story with numerous historical sounding accounts of what happened to a character 50 years in the future, or to his forbears and how that led up to the current situation and person. This tendency vitiates the vitality of the story and makes the reader feel the book was written by an historian who couldn't subdue his usual writing style to do a novel. Intriguing premise and situation. But a book that ultimately saps the reader's interest.