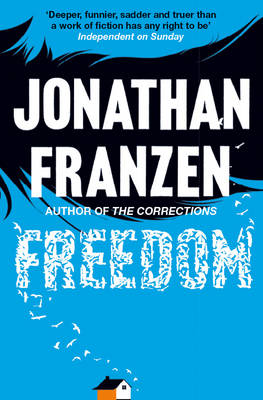 The new novel from the author of The Corrections.Patty and Walter Berglund were the new pioneers of old St. Paul - the gentrifiers, the hands-on parents, the avant-garde of the Whole Foods generation. Patty was the ideal sort of neighbour who could tell you where to recycle your batteries and how to get the local cops to actually do their job. She was an enviably perfect mother and the wife of Walter's dreams. Together with Walter - environmental lawyer, commuter cyclist, family man - she was doing her small part to build a ... Read More

The new novel from the author of The Corrections.Patty and Walter Berglund were the new pioneers of old St. Paul - the gentrifiers, the hands-on parents, the avant-garde of the Whole Foods generation. Patty was the ideal sort of neighbour who could tell you where to recycle your batteries and how to get the local cops to actually do their job. She was an enviably perfect mother and the wife of Walter's dreams. Together with Walter - environmental lawyer, commuter cyclist, family man - she was doing her small part to build a better world.But now, in the new millennium, the Berglunds have become a mystery. Why has their teenage son moved in with the aggressively Republican family next door? Why has Walter taken a job working with Big Coal? What exactly is Richard Katz - outre rocker and Walter's old college friend and rival - still doing in the picture? Most of all, what has happened to poor Patty? Why has the bright star of Barrier Street become "a very different kind of neighbour," an implacable Fury coming unhinged before the street's attentive eyes?In his first novel since The Corrections, Jonathan Franzen has given us an epic of contemporary love and marriage. Freedom comically and tragically captures the temptations and burdens of too much liberty: the thrills of teenage lust, the shaken compromises of middle age, the wages of suburban sprawl, the heavy weight of empire. In charting the mistakes and joys of Freedom's intensely realized characters, as they struggle to learn how to live in an ever more confusing world, Franzen has produced an indelible and deeply moving portrait of our time. Read Less

All Editions of Freedom

I started off liking the book and found the characters and writing very interesting. As the book progressed, I felt as though he kept adding nuances, quirks, stories, etc. just to keep the book going. I became tired of reading and found myself skimming the last 75 pages just to see how it ended.

Thinking back on Freedom

Entertainment magazine had an article by Stephen King and the best books he read last year - Freedom was #2. It took me awhile to get into the book and I wasn't sure if I liked it. However, of all the books I read this past year, this is the one that I keep thinking about. I recall many passages and moments. Freedom was well worth my time.

I?m not quite sure what to say about Freedom by Jonathan without my own literary prejudices and tastes polluting the discussion. It wasn't a bad book by any means. Full of irony, satire and, ultimately, redemption on one hand and vaguely unlikeable, self-crippling characters and a meandering story on the other, Mr. Franzen takes his readers on a long hard road. This, apparently, is what we want in a literary writer these days--pages and pages of detail and minutiae of everyday life in the creation of "real" characters. Frankly I find the drama of ?soiled sheets and dirty milk glasses? and the multi-generational history of every character we meet a little wearisome, but, perhaps, I?m in the minority.

I can't help but compare this book to the one I just finished: Empire Falls by Richard Russo. The two books have a very similar theme--the crumbling values (and value) of the middle class. Russo?s Midwesterners are a harder scrabble lot than Franzen?s upper middle class Minnesotans. They are, of course just a flawed as Franzen's--but somehow more sympathetic. A hard-working manager of a local restaurant attempting to juggle his extended family, work and his own wavering self-worth was to me infinitely more sympathetic than the neurotic, entitled, navel-gazing lawyers, jocks and musicians of Freedom. Of course, Mr. Franzen doesn?t want us to sympathize with his characters. He lays their self-imposed yuppie hell bare for our dispassionate dissection. Still 900 pages detailing characters we?re not supposed to like is a little much.

Despite his intricate prose, many of the plot points clanked a little on my sensitivities (the teenage boy moving in with the neighbor girl, the college kid landing a defense contract, the side trip to Patagonia, the famous punk rocker from the University of Minnesota, the environmentalist defending mountain-top removal). That and the overall dour tone were a little disappointing. Mr. Franzen came so well acclaimed as a social satirist that the almost complete and utter lack of humor was pretty surprising.

The ending, when it finally comes, is terrific. It?s almost a Buddhist-like revelation. The characters have hit rock bottom and find redemption in each other?s severely taxed love. The final climatic scene is fitting, as Patty must give up everything in order to ?come in from the cold.? I?m just afraid, in my case, it was a little too little, a little too late.

I loved 'The Corrections' and this book might be even better. The characters were fascinating and well-developed. One theme of this book may be "well-intentioned people sure can make a mess of things." This is a good book for book clubs; there is a lot to discuss about parents and children and husbands and wives.