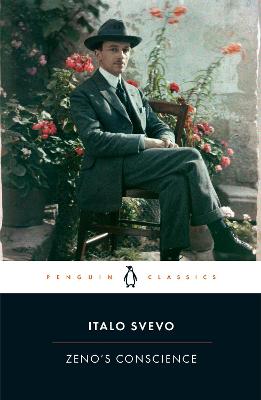 The modern Italian classic discovered and championed by James Joyce, ZENO'S CONSCIENCE is a marvel of psychological insight, published here in a fine new translation by William Weaver - the first in more than seventy years. Italo Svevo's masterpiece tells the story of a hapless, doubting, guilt-ridden man paralyzed by fits of ecstasy and despair and tickled by his own cleverness. His doctor advises him, as a form of therapy, to write his memoirs; in doing so, Zeno reconstructs and ultimately reshapes the events of his life ... Read More

The modern Italian classic discovered and championed by James Joyce, ZENO'S CONSCIENCE is a marvel of psychological insight, published here in a fine new translation by William Weaver - the first in more than seventy years. Italo Svevo's masterpiece tells the story of a hapless, doubting, guilt-ridden man paralyzed by fits of ecstasy and despair and tickled by his own cleverness. His doctor advises him, as a form of therapy, to write his memoirs; in doing so, Zeno reconstructs and ultimately reshapes the events of his life into a palatable reality for himself - a reality, however, founded on compromise, delusion, and rationalization. With cigarette in hand, Zeno sets out in search of health and happiness, hoping along the way to free himself from countless vices, not least of which is his accursed "last cigarette!" (Zeno's famously ineffectual refrain is inevitably followed by a lapse in resolve.) His amorous wanderings win him the shrill affections of an aspiring coloratura, and his confidence in his financial savoir-faire involves him in a hopeless speculative enterprise. Meanwhile, his trusting wife reliably awaits his return at appointed mealtimes. Zeno's adventures rise to antic heights in this pioneering psychoanalytic novel, as his restlessly self-preserving commentary inevitably embroiders the truth. Absorbing and devilishly entertaining, ZENO'S CONSCIENCE is at once a comedy of errors, a sly testimonial to he joys of procrastination, and a surpassingly lucid vision of human nature by one of the most important Italian literary figures of the twentieth century. Read Less

All Editions of Zeno's Conscience

As a man grows older

The Rings of Saturn

As a man grows older

Journey to the End of the Night

A Great Novel Of Trieste

The philosopher Kwame Anthony Appiah's recent book "The Lies that Bind: Rethinking Identity" led me to Italo Svevo's modernist novel of 1923, "Zeno's Conscience". Appiah's book examines various concepts of personal identity that shape individuals' views of themselves and others, including religion, country, color, class, and culture. Appiah argues that individuals tend to take a too narrow, rigid view of their identities and urges the rethinking and broadening of identity concepts with the words of the Roman dramatist Terrence as a guide: "nothing human is foreign to me".

Appiah's study discusses Svevo and his novel "Zeno's Conscience" at length and with high praise. Raised as a Jew, a convert, to please his wife, to Catholicism, and with ties to many nations and languages. Svevo developed, in Appiah's account, a cosmopolitanism and an openness to shared identity that appears to be a model for Appiah's own views. In one of many passages in his book discussing "Zeno's Conscience", Appiah writes.

"Although he once referred to Trieste as a crogiolo assimilatore -- an assimilating crucible, or melting pot -- Svevo knew how much remained unmelted. His Zeno is, above all, a walker in the city, a boulevardier and rambler, moving from one neighborhood to another. He is also a man always struggling with his own irresolution, always smoking his 'last cigarette', always betraying his ideals, and forever scrutinizing his own prejudices and preferences like a quizzical ethnographer. He wants to confront uncomfortable truths -- to side with reality, however much it stings." (Appiah, p. 86)

Appiah's praise brought me to this book and also helped me with its difficulties and ambiguities. Svevo was born Aron Ettore Schmitz and took the pen name Italo Svevo to combine the Italian and Swabian parts of his background. His novel is set in Trieste in the years leading up to WW I. Located in northern Italy on the Baltic Sea, Trieste was an important commercial center and port. Trieste has always been a cosmopolitan city with broad diversity and varying rulers. At the time covered in this novel Trieste was part of the Austria-Hungarian Empire but enjoyed substantial local autonomy. People in Trieste had developed their own language, Triestene, a dialect of Italian.

Trieste, in its diversity and cosmopolitanism, is a main character in Svevo's book. The main human character is one Zeno Cosini, a businessman and sometimes idler in Trieste. The elderly Zeno has been undergoing psychoanalysis and has prepared his memoirs at the behest of the psychiatrist. The psychiatrist has released the memoirs to the public in a fit of pique at Zeno for leaving therapy. The purported memoirs form the bulk of the novel, with the exception of the concluding chapter.

Zeno speaks in the first person of important events in his life. He is a highly neurotic, vacillating individual pulled, as are most people, between impulses and ideals. Zeno's memoirs discuss aspects of his life in great detail and with sometimes questionable accuracy. He is highly self-centered and alternates between tones of self-justification and folly. The tone moves between humor, irony, and seriousness. The book is organized more by incidents and themes in Zeno's life than by strict chronology -- the themes overlap.

Perhaps the best-known part of the book is the first, short chapter in which Zeno chronicles his efforts to give up smoking and the many times in his life when he smokes his "last cigarette". Zeno then discusses his ambivalent relationship to his father and the heavy influence on his life of his father's death which occurred when Zeno was thirty. His businessman father left him a large inheritance to be managed by a long-time employee to prevent his son from squandering it.

In the longest sections of the book, Zeno discusses his peculiar courtship of three young women whose names begin with "A" and who are daughters of a wealthy, flamboyant businessman whom Zeno has befriended. Zeno is rejected by two girls and accepted by the third who is physically less attractive than her sisters. Zeno proves an unfaithful husband, and he gives much attention to his affair with a young, poor would-be singer, Carla. The long relationship with Carla would not be Zeno's only infidelity. Still, the marriage endures and becomes a source of meaning for Zeno.

Another lengthy chapter of the book describes Zeno's relationship with a young man, Guido, who has courted and won the sister whom Zeno had wished to marry. The story involves wheeling and dealing and much emotional and financial turmoil.

The novel includes a great deal of detail and tension as Zeno moves from the frequently sordid, foolish actions of his life through his ideals to gain eventually a degree of peace. Among the many ambivalences of the book is Zeno's attitude to psychoanalysis -- he is ultimately able to jettison his therapy. The novel has many small scenes that develop its large themes including a pivotal scene with spiritualism and a Ouija board and many scenes and characters showing the love of music. I thought one of the finest moments of the work was a scene in which Carla at last breaks off the affair with Zeno in favor of marriage to her voice teacher. As Zeno leaves her residence, he hears the teacher playing Schubert's song "Abschied" -- "Farewell" on the piano he has purchased for the young woman in the arrangement by Liszt. It is an apt moment and choice and made me revisit the beautiful song I have known for a long time.

The novel has the themes that Appiah found in the book and it deserves the praise he heaped on it. It offers a portrait of a fascinating city and of a troubled individual who ultimately learns to live and enjoy life and carry on. I was grateful for the opportunity to get to know this classic, modernistic novel.

How often does a book make you fall in love with the central character and then in a few short paragraphs cause you to completely reassess him, and love him even more? Zeno's Conscience is an outrageously funny book that will keep you chuckling and then take your laughter to tears and bring you to thinking about what is most important in your own life.