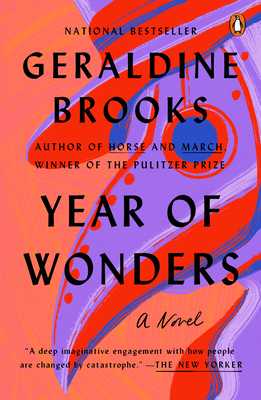 In 1666, a young woman comes of age during an extraordinary year of love and death. Inspired by the true story of Eyam, a "plague village" in the rugged hill country of England, "Year of Wonders" is a richly detailed evocation of a singular moment in history, written by the author of "Nine Parts of Desire: The Hidden World of Islamic Women." Read More

In 1666, a young woman comes of age during an extraordinary year of love and death. Inspired by the true story of Eyam, a "plague village" in the rugged hill country of England, "Year of Wonders" is a richly detailed evocation of a singular moment in history, written by the author of "Nine Parts of Desire: The Hidden World of Islamic Women." Read Less

All Editions of Year of Wonders: A Novel of the Plague

One Thousand White Women: The Journals of May Dodd

Geraldine Brooks' "Year of Wonders" (2001) is a historical novel based loosely upon a plague epidemic which struck the small village of Eyam in Derbyshire, England in 1665 -- 1666. Led by their minister, the villagers subjected themselves to a quarantine to prevent the spread of the dreaded pestilence. Many villagers died. Brooks has written a work of fiction rather than a historical study. The book captures well the death, dread and superstition the plague engendered in 17th Century England. Less successfully, Brooks' novel is also a character study of its three major protagonists.

In Brooks' novel, Eyam had a population of about 320, with most of the residents engaged in farming or in lead mining on the hills. The story is told in the first person by Anna Frith, age 18. Married at 15 to Sam, a miner, Anna has two young boys by the age of 18. When Sam dies in a mining accident, Anna takes a border, a tailor named George Viccars, to help with expenses. Viccars soon proposes to Anna but contacts the Plague the following morning. He soon dies as do Anna's two small sons. The contagion spreads to the community.

The other two primary characters in the novel are the minister, Michael Mompellion, 28, and his wife Elinor. Anna is a servant to the minister. Elinor takes an interest in her, sees her intellectual curiosity and ability, and teaches Anna to read. When the plague ravages the town in earnest, Mompellion persuades the town to impose a quarantine which is observed by all but the wealthiest family, the Bradfords. Rector Mompellion pledges to attend the dying while Elinor and Anna work assiduously with the living, including offering care to Plague sufferers as well as delivering babies.

The book is at its best in showing the death and the brutality resulting from the Plague. Brooks shows a community wracked by both religion and demonology as many townspeople accuse a woman and a young niece, the Gowdies, who live unconventional lives and study herbs and remedies of witchcraft. The novel depicts violent scenes brought in the wake of the Plague. Anna's father is impaled by knife outside a mine after he confesses to stealing while his stepmother, who sells false amulets to ward off the plague, suffers madness after she spends an evening in a deep vat of pig excrement. The scenes of the Plague, which ultimately takes the life of one-half the residents, are graphically described.

Anna, Elinor, and Michael Mompellion behave heroically in tending to the town. Anna and Elinor try to capture the medicinal knowledge of the Gowdies before their deaths to save lives and ease suffering. Mompellion, stern but apparently compassionate, keeps his promise to attend and assuage the dying. As the story develops, Anna becomes close to both Elinor and Michael and gradually gains confidence in her abilities, her medicinal skills, and her talent for midwifery. When Elinor dies late in the novel, Anna tries for a time to bring comfort to the depressed Michael.

Brooks brings an avowedly secular understanding to her story. In a strong scene in the book, Anna is made to realize that neither God nor demons -- goodness or sin -- hold the key to the Plague. She concludes that the disease is caused by natural circumstances, and that efforts spent in prayer or demonology would be better used in searching for the cause of the disease. In a lengthy, thoughtful meditation draws what seems to me a still valuable lesson in thinking about the Plague and similar scourges and natural disasters. Anna concludes:

"For if we could be allowed to see the Plague as a thing in Nature merely, we did not have to trouble about some grand celestial design that had to be completed before the disease would abate. We could simply work upon it as a farmer might toil to rid his field of unwanted tare, knowing that when we found the tools and the method and the resolve, we would free ourselves, no matter if we were a village full of sinners or a host of saints." (p. 215)

A degree of anachronism in the telling detracts from Brooks' story. Some readers might be unconvinced by the sophisticated secular approach that Brooks gives to Anna. More broadly, some of Anna's intellectual and physical accomplishments in this story strain credibility. Anna undertakes a difficult, dangerous mining operation of the sort that would have stymied her husband and other skilled miners in the town. She learns a degree of Latin and develops, in Brooks' story, high medicinal sophistication in a matter of months. Her medical skills increase to a dazzling degree as the novel works to its conclusion. In addition, under the influence of the Gowdies, Anna develops a sense of personal and sexual independence that would be bold enough even in early 21st Century America let alone 17th Century rural England. Anna's development, and to a lesser degree the unfolding of Elinor and Michael's characters seem to me ahistorical and geared towards the values of many contemporary people.

I had questions, as discussed above, about character development in this novel as well as about the rapid denouement which seems forced in many ways. Yet, "Year of Wonders" is a gripping novel which offers an account of the Plague and its terrors and of human vulnerability.

Fabulous read, and very good book club discussion book. Interesting characters, and learned something of the plague which i knew nothing about.

A great read. I loved it. My husband loved it. Transport back to an earlier time England mid-1600s. The language in archaic enough to make you feel you are actually back in time, yet not so archaic that you have any trouble at all following the story. If you enjoy historical fiction or just fiction set in older times this is for you.

A don't want to stop reading book. Loved it.
Heroine had me soon as I got comfortable in my chair.

One of the best books ever

a very well written story on the plague in England.
through the eyes of someone who has to deal with the ordeal of caring and burying all the people around her. The book is written with wit and masterfully takes you to a very difficult time in the life of a town covered with sickness, envy, faith and love.
superb