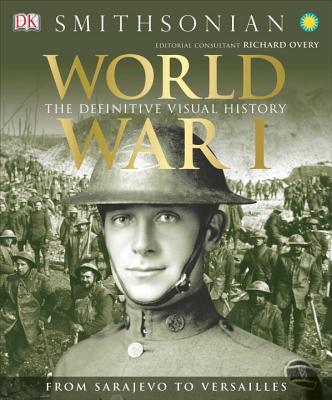 World War I: The Definitive Visual History: From Sarajevo to Versailles

Encouraging critical thought and analysis of a historical cornerstone, this title considers how tangled European alliances swiftly led to a general European war in the aftermath of Archduke Franz Ferdinand's assassination in June 1914. Discussion of World War I includes information about trench warfare, the war in Turkey and the eventual peace. Read More

Encouraging critical thought and analysis of a historical cornerstone, this title considers how tangled European alliances swiftly led to a general European war in the aftermath of Archduke Franz Ferdinand's assassination in June 1914. Discussion of World War I includes information about trench warfare, the war in Turkey and the eventual peace. Read Less

Flight: The Complete History of Aviation

Battle: A Visual Journey Through 5,000 Years of Combat

Warrior: A Visual History of the Fighting Man

Sin in the Second City: Madams, Ministers, Playboys, and the Battle for America's Soul

Battle: A Visual Journey Through 5,000 Years of Combat

The American Revolution: A Visual History

The Civil War: A Visual History

Studying The Great War With The Smithsonian

The Smithsonian Institution and DK Publishing have produced this new history, "World War I: The Definitive Visual History from Sarajevo to Versailles" (2014) to commemorate the 100th anniversary of the Great War. Superlatives deserve to be approached with skepticism, but the term "definitive visual history" may be warranted in this instance. R.C. Grant, who has written many books on modern warfare, is credited as the author while Richard Overy, Professor of History at the University of Exeter is listed as a consultant.

The Smithsonian's WW I consists of about 350 pages divided into seven large chapters. It begins with an introductory chapter covering the conditions that led to the War between 1870 and 1914. The next five chapters cover the progress of the war on a year-by-year basis from 1914 to 1918 through the Armistice of November 11, 1918. The concluding chapter explores the aftermath of the war through 1923, including the Paris Peace Conference, the Treaty of Versailles, and the continued world instability which led to WW II.

The book is evenly divided between text and pictures. The text includes a great deal of information on every page. Each chapter begins with a timeline in a calendar format which summarizes the major events of the year under discussion. The discussion then proceeds in two-page sections on facing pages covering a small, specific aspect of the war. The topics covered include battles, leaders, political events, campaigns, and activities on the home fronts, including, for example the Russian Revolution, and the abdication of Kaiser Wilhelm II late in the War. The war on land, sea, and air is described as are the many fronts on which WW I was fought. There are insets in the text giving a short "before" and "after" summation for each event discussed. There are also extended cross-references in the book between related topics. The "before" and "after" format and cross-references provide continuity to the presentation and allows the reader to explore a subject in the middle of the book with some necessary perspective of what came before and after. It also leads to a degree of repetition, but repetition is the mother of learning. The text includes many sections labeled "eyewitness" in which contemporaneous voices are heard about the particular event under discussion.

The pictures in the volume are well-chosen and clearly presented and labeled. They are in a mix of color and black and white. The books include maps and military diagrams for readers interested in following the progression of the many battles described. There are photographs of the trenches and their hardships, of combatants, of propaganda tools, of soldiers and leaders, of weaponry, ships, guns, planes, and more.

The book provides a surprisingly detailed overview of the Great War. It gives a feel for the enormity of the conflict in terms of size and loss of life. It helps the reader understand the origins of the Great War, its course and increasing futility, its relationship to WW II, and its continuing impact. It is a necessary and important history to understand, but not an edifying one.

Although in nearly coffee-table size and with many photographs, this book is a work for serious reading rather than for browsing. It requires about the same length of time to read and digest as a standard, non-pictorial account of the Great War. The authors are careful to present issues and controversies relating to the War without drawing dogmatic conclusions. Rather, the book encourages readers to think about the Great War and its impact. This Smithsonian pictorial history makes an excellent choice for readers who want to read one book about WW I. Readers with a serious long-term interest in the War will also learn a great deal from this volume.