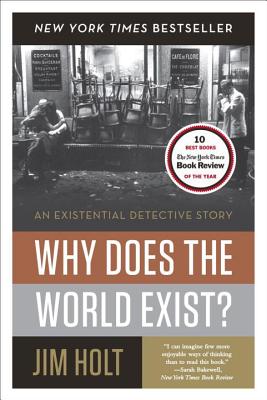 Why Does the World Exist?: An Existential Detective Story

Whether framed philosophically as "Why is there a world rather than nothing at all?" or more colloquially as "But, Mommy, who made God?" the metaphysical mystery about how we came into existence remains the most fractious and fascinating question of all time. Following in the footsteps of Christopher Hitchens, Roger Penrose, and even Stephen Hawking, Jim Holt emerges with an engrossing narrative that traces our latest efforts to grasp the origins of the universe. As he takes on the role of cosmological detective, the ... Read More

Whether framed philosophically as "Why is there a world rather than nothing at all?" or more colloquially as "But, Mommy, who made God?" the metaphysical mystery about how we came into existence remains the most fractious and fascinating question of all time. Following in the footsteps of Christopher Hitchens, Roger Penrose, and even Stephen Hawking, Jim Holt emerges with an engrossing narrative that traces our latest efforts to grasp the origins of the universe. As he takes on the role of cosmological detective, the brilliant yet slyly humorous Holt contends that we might have been too narrow in limiting our suspects to God vs. the Big Bang. Whether interviewing a cranky Oxford philosopher, a Physics Nobel Laureate, or a French Buddhist monk, Holt pursues unexplored and often bizarre angles to this cosmic puzzle. The result is a brilliant synthesis of cosmology, mathematics, and physics-one that propels his own work to the level of philosophy itself. Read Less

All Editions of Why Does the World Exist?: An Existential Detective Story

Why Does the World Exist?: One Man's Quest for the Big Answer

Bloodlands: Europe Between Hitler and Stalin

Why the West Rules - For Now: The Patterns of History, and What They Reveal about the Future. Ian Morris

The Swerve: How the World Became Modern

A Universe from Nothing: Why There Is Something Rather Than Nothing

Mr. Holt throws us back to the Greek philosophers and drags us into string theory, all in pursuit of finding out if 'Nothing" can exist, and if so, why is our universe here instead of...nothing.
Another title might have been "Why MUST the World Exist?"
I'll not pretend this requires the same amount of attention as a beach thriller: it requires a good deal more. But the rewards are commensurately greater, assuming the reader has an interest in existence, or has marveled at the night sky, or wondered where morality comes from.
Highly recommended.

Just Where Did We Come From?

Why is there something instead of nothing? Why does the universe exist? How did we get here? Why is the human race in the position to figure this out? I am fairly new to the world of philosophy. It is definitely an acquired taste. There were times when I had to force myself to go on with the reading of this book. The twists in logic can be more confusing than teaching trigonometry to a first grader. But once I came out the other side a good deal of it made sense, (at least as far as that is possible).
Of course it is easier to leave the big questions to someone else, (like the clergy). To be ?properly? assimilated, in the cultural sense, most of us will go along to get along. You know the story, your parents push your butt out the door on Sunday, (or Saturday, depending on your religion), and we are then told for the next decade what we are to believe for the rest of our lives.
As we make our links in life it is a very precarious thing to stop in mid-download for a reevaluation. While you are standing there pondering your navel the rest of the herd marches on, and the last thing a young person wants is to feel left out. But maybe somewhere down the line you will find yourself living a lie, or at the least, having some doubts. Or maybe your faith is open enough to allow for some personal interpretation. Or maybe you have already made the break, or you were never exposed to religion in the first place. In any event, if you are the least bit concerned about the subject of how we got here you should allow yourself the opportunity to reflect on the choices. But what should you base your new conclusions on? Should it be science, philosophy, or religion; or a combination of them all?
In this book you will get a foundational course in the first two. Mr. Holt will march you through Plato, Wittgenstein, Julian Huxley, John Updike, Einstein, Newton, Hawking, and everyone in between. But let me be clear, there is no single theorem, no ?one size fits all?, at present, that will clear up the great mystery.
Empiricism comes up short. To quote Mr. Updike, (who was interviewed for this book shortly before his death): ?Science aspires, like theology, to explain absolutely everything. But how can you cross this enormous gulf between nothing and something, and not just something, a whole universe?? How can we wrap our mind around the Big Bang, when all of the ?stuff? of creation was supposedly condensed into the size of a grape? And what was there before that? Isn?t space itself, (even if it is empty), something? How can a system that is contained within a condensed mass exist outside of itself to precipitate the explosion? The same logic applies to the religious side. How can a being manifest itself from nothingness, and then, while hanging out in the void, create everything through will power alone?
Maybe we are not wired to understand this yet, or maybe we haven?t reached that level of intellectual development. But that shouldn?t stop you from thinking about it. This book is a great place to start. The author Jim Holt has obviously given this subject a lot of thought, as have the interviewees who participated in the project. But it all comes back to that whole chicken or the egg thing. What came first, the universe or the creator, or the creation event, stimulated by the innate physical laws we have all come to know and love? Or are we inside of one big cyclical turnaround?