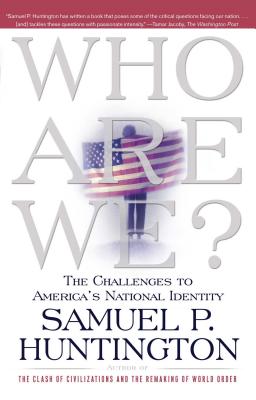 Who Are We?: The Challenges to America's National Identity

The author of "The Clash of Civilizations and the Remaking of World Order" turns his attention to the cultural rifts in this country. The patriotic response to 9-11 only highlighted the loss of American identity here at home, says Huntington, and already the flag-waving has begun to subside. Read More

The author of "The Clash of Civilizations and the Remaking of World Order" turns his attention to the cultural rifts in this country. The patriotic response to 9-11 only highlighted the loss of American identity here at home, says Huntington, and already the flag-waving has begun to subside. Read Less

All Editions of Who Are We?: The Challenges to America's National Identity

The Clash of Civilizations and the Remaking of World Order

The Clash of Civilizations?: The Debate

The soldier and the state; the theory and politics of civil-military relations.

The Crisis of Islam: Holy War and Unholy Terror

The End of History and the Last Man

The Clash of Civilizations and the Remaking of World Order

A wise book to understand who we are

A profound analysis of the American identity and our culture. In my opinion every American has to read it.

Not an easy read but worth it

I am a Huntington fan. This book is the magnum opus of a teacher-scholar that closes a distinguished career.
This book identifies the virtues [not just plain values as moderns like to think of them] that have distinguished the United States of America from Old Europe and other nations over the last two centuries.
What is immensely appealing about this book is the fact that Huntington is not bashful when it comes to identifying specifically those distinctive virtues that have made America a great Nation, and the cultural requirements that make nations great.
Culture, Anglo-Saxon Culture, is essential, as the author points out, and thus that means our present distraction with political correctness finds no ledge on which to stand. PC talk is equivalent to standing in mid-air and not expecting to fall.
This work is important especially now, since we have been lead to believe that importing populations from troubled spots in the world, i.e, the Middle East and Eastern Africa and others who have made a complete mess of their homelands, will somehow turn out to be a stroke of genius, and build a new world order.
Huntington, while he does not deal directly with these comments, he makes it abundantly clear that if the American culture fails, as it is, then the essential nature of America will be discarded in favor of a hodge-podge of competing and vocal and often violent groups who bring their own culture and mores with them, and seek to impose these on America.
On the other hand, if one reads a broad spectrum of newspapers [Wall Street Journal and Financial Times and some other papers] and is alert to news via the Internet and radio but not TV [because TV news is to sell a product or service, and the news is merely clips], then, Huntington's book will put a refreshing focus on the passing news scene.
The passing news scene is what eventually will constitute part of history if future historians are honest, and not revisionists.
Huntington enables the reader to sort the grain of wheat from the layers of chaff of passing modernity, the pop themes and culture of this day.
I enthusiastically recommend engaging this book, with one hand on the newspaper and the other hand on this book.
James A. Glasscock
Longdrycreek Ranch
Texas Panhandle