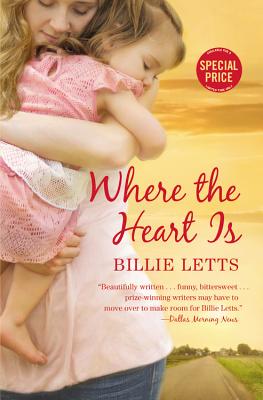 Where the Heart Is

Novalee is 17 and pregnant when her boyfriend abandons her, shattering her dreams of a new life. Penniless, she stays in the shopping mall where he left her, roaming the stores at night, and keeping a tally of what she owes the shopkeepers. Read More

Novalee is 17 and pregnant when her boyfriend abandons her, shattering her dreams of a new life. Penniless, she stays in the shopping mall where he left her, roaming the stores at night, and keeping a tally of what she owes the shopkeepers. Read Less

All Editions of Where the Heart Is

The Honk and Holler Opening Soon

While I Was Gone

This book is wonderful. If you know someone that is ill or down or needs to be encouraged and blessed by thoughts of Jesus and his love of us, this is the book for you.
The vendor sent the book very fast and the book was like brand new. Very pleased. Thank you for such a good deal.

One of My Top Ten Favs

Where the Heart Is by Billie Letts. Is one of my all time favorite books. The book is about a girl named Novelee Nation who?s unlucky number is 7. In the beginning of the story she is seventeen years old, seven months pregnant and her boyfriend abandoned her at a Walmart with $7.77 in change. They were supposed to be heading to California but he leaves her in Sequoyah Oklahoma. Where she meets a group of deeply caring people.
To me Where the Heart Is, is the story of a girl who had nothing and had to start her life from scratch. What makes Novelee an even more relatable character to me is that she didn?t become some really big cliché movie star or something, She started off slow and accomplished her goal of being a photographer. Which relates to me personally on so many levels, I start things off slowly but I believe I?ll always do what I was meant to in the end.
The story also gave me hope that there are towns and places out there where the people are that great. Yes there are a couple of bad apples but each person has a neighbor that they can lean on for support or guidance. Another character/story that I can relate to is Forney Hull. He was a librarian in a small town that had a lot of potential to be someone great. But he put his goals and dreams on hold for his sister.
When I?m feeling low, and like I?ll never get anything accomplished in life, I pick up my copy of ?Where the Heart Is?. Even though the story and its characters are fiction they still have the way of making me feel that even when things go completely wrong you still have the power to turn your own life around for the better. Because ?When life gives you lemons, you make lemonade?.

I enjoyed the book much more than the movie, Hope everyone else does too!

Watch out for those 7s..

Truthfully, I don't even recall how I got this novel in my possession. I'm an avid fantasy reader so one of my friends must have loaned it to me or LEFT it in my library perhaps. Either way, reading this novel was perhaps one of the best things I could have done.

Novalee Nation is a woman you cannot help but love. As a naive pregnant 17 year old, she initially finds herself stranded (left by her A-hole boyfriend) at Walmart with hardly any money except $7.77.

What I enjoyed the most about this novel is how there are NO traditional families in a very "traditional" southern state. Novalee is a single mom raising Americus, Lexie has a series of babies with different men, and yet all of them fit together perfectly together. It is so fascinating to see all the people interacting with Novalee; despite her commenting on how uneducated she is she proves herself over and over again as a survivor.

One of the best scenes in the novel is when she is honored for her photography. I felt so proud of her accepting her award and cementing her career as a photographer.

This is by far one of my favorite books ever. The movie does it no justice what so ever. It is like nothing I have ever read before and set the stage for me to read more novels to try and find something to compare with it, and I haven't found it yet. The characters are everyday people that the reader can totally identify with. It is one of those books that I can read again and again.