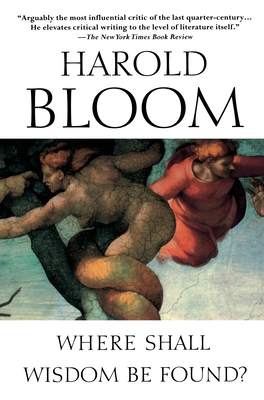 Where Shall Wisdom Be Found?

In this inspiring book, a preeminent literary critic, takes readers from the Bible to 20th-century writing, searching for the ways in which literature can inform our lives. Read More

In this inspiring book, a preeminent literary critic, takes readers from the Bible to 20th-century writing, searching for the ways in which literature can inform our lives. Read Less

All Editions of Where Shall Wisdom Be Found?

Shakespeare: The Invention of the Human

The Western Canon: The Books and School of the Ages

How to Read and Why

The Book of J

A Map of Misreading

Ruin the Sacred Truths: Poetry and Belief from the Bible to the Present

Jesus and Yahweh: The Names Divine

How to Read and Why

Genius: A Mosaic of One Hundred Exemplary Creative Minds

In Where Shall Wisdom Be Found? Harold Bloom writes of several renowned authors who have influenced his particular kind of wisdom. All are contributors to the Western canon Bloom has come to espouse, though a few are not so well recognized now. Whether Bloom has culled his wisdom from these authors or respects them for their reflection of his own is questionable; he has the hutzpah that it might be the latter. He writes that this book, this line of thinking on wisdom, was inspired by a life-threatening illness, so it is personal as much as academic. It is only near the closing that he defines his wisdom, after pulling extracts and conclusions from authors that include the author of Ecclesiastes, Plato, Augustine, the greatest thinker Shakespeare, Cervantes, Montaigne, Francis Bacon, Samuel Johnson, Emerson, Nietzsche, and Freud. Bloom?s wisdom is ?a secular wisdom fused with a purely aesthetic experience at once freely hedonistic and cognitively strong? (278).

Observing such literary icons means the book is a very general overview. One or two books by each author is mentioned; there are no citations. Some of Bloom?s statements are abstractions drawn from several works or a life?s work by an author, made from Bloom?s voluminous reading, and so can be difficult to understand unless you?ve read the same volume. Still, if you like books on Great Books, this satisfies. If you have an interest in Bloom?s personal picks, such as the rather surprising choice of Samuel Johnson as the ideal literary critic, then this is a good book.