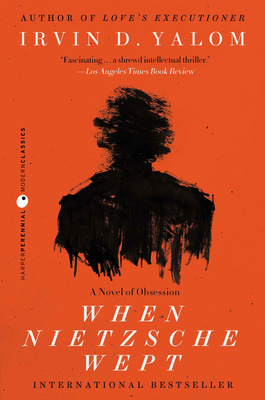 A richly evocative novel set in 19th-century Vienna on the eve of the birth of psychoanalysis--by the bestselling author of Love's Executioner. The eminent physician Josef Breuer is asked to treat Friedrich Nietzsche's suicidal despair after the end of a love affair--without his knowing it. The doctor devises an ingenious plan, which ultimately involves a young intern named Sigmund Freud. Read More

A richly evocative novel set in 19th-century Vienna on the eve of the birth of psychoanalysis--by the bestselling author of Love's Executioner. The eminent physician Josef Breuer is asked to treat Friedrich Nietzsche's suicidal despair after the end of a love affair--without his knowing it. The doctor devises an ingenious plan, which ultimately involves a young intern named Sigmund Freud. Read Less

All Editions of When Nietzsche Wept

Lying on the Couch

Every Day Gets a Little Closer: A Twice-Told Therapy

When Nietzsche Wept: A Novel of Obsession

Love's Executioner and Other Tales of Psychotherapy

Irvin Yalom is a psychiatrist with a deep interest in philosophy. In works of fiction and non-fiction he has tried to combine these two disciplines for the insights they may jointly offer to people. "When Nietzsche Wept" (1992) is probably Yalom's most successful novel. In his book, Yalom imagines a lengthy encounter between Josef Breuer (1842-1925), a Viennese physician who, among other accomplishments helped found psychoanalysis, and the philosopher Friedrich Nietzsche.(1844 -1900)

Yalom's story is subtitled "A Novel of Obsession". Both Nietzsche and Breuer are obsessed with a woman and with sexuality, as well as with their own loneliness, and their attempts to understand themselves and find meaning in their lives. The book is set in Vienna in 1882. Breuer, age 40, and highly successful has ended the doctor-patient relationship with a woman in her early twenties, Bertha O., with whom he has been sexually obsessed. Breuer has been using talk-therapy with Bertha, the first time this technique had been attempted. Breuer has been neglecting his wife, Mathilde, and their five children over his obsession with Bertha and with his heavy commitments to his medical practice and research.

While Breuer and Mathilde are on a brief holiday, Breuer is approached by the young, beautiful and highly self-willed Lou Salome who asks Breuer to help cure the suicidal tendencies of her friend and teacher Nietzsche. Nietzsche had, in fact, fallen in love with Salome, proposed to her, and been rejected. He is deeply despondent and, indeed, suicidal, and suffers from migraine headaches.

The first half of the book details how Breuer and Nietzsche make contact and shows their initial testy relationship. In the second part of the book, Breuer persuades a highly reluctant Nietzsche to enter a clinic for a short stay, where Breuer will attempt to cure Nietzsche's migraines and Nietzsche, in turn, will offer philosophical counseling to Breuer to try to help the physician understand his life, his obsession with Bertha, and his feelings about Mathilde.

In the course of their discussions, Breuer and Nietzsche gradually become friends and reveal some of their innermost feelings to each other. Both men share a deep skepticism towards religion, with Nietzsche famous for his aphorism, "God is dead". In Yalom's book, Nietzsche explains that the goal of his thought is to find meaning in live rather than nihilism or despair in the face of the denial of theism. In the course of the book, the reader learns a great deal about Nietzsche's thought, with portions of his imaginary conversations with Breuer taken extensively from his writings.

Through his conversations with Nietzsche, Breuer comes to learn something of his fear of dying and of purposelessness, and, with great strain, he frees himself of his obsession with Bertha. Nietzsche comes to understand Breuer, and he learns something of his relationship to Lou Salome. He recognizes more fully than he had done earlier the loneliness of his path in life, but he also recognizes his need for affection and friendship with others. Nietzsche, with this new understanding, determines to follow through with the course he has set himself. When the book concludes, Nietzsche is about to begin writing his masterwork, "Thus Spoke Zarathustra".

Yalom's book explores two difficult ideas of Nietzsche's: the doctrine of eternal recurrence and the, for Nietzsche, closely related injunction: "amor fati" -- to love one's fate or one's life. With moments of trepidation and some highly surprising twists in the story Breuer, and Nietzsche too, learn to love their respective lives.

Yalom's book is an imaginative creation of the birth of "talk therapy" and it shows the relationship between philosophical concerns and the concrete issues of individuals that are explored in psychotherapy. In addition to its portrayals of the two major characters, Yalom offers good portrayals of the young Sigmund Freud, a student and friend of Breuer, of Lou Salome, and of fictitious characters such as Breuer's long-suffering friend Max and Breuer's coachman, Fischmann.

Yalom has written a compelling philosophical novel about Nietzsche which helps show the impact Nietszche's thinking continues to exert on many readers. The book may encourage readers to explore Nietzsche's difficult thought for themselves. In its own right, Yalom's book may help people think in a new way about their lives and to work towards "amor fati" --- living one's life so that one may understand, shape, and embrace one's destiny.